Home / Articles and Media / What is the Third Eye?

What is the Third Eye?

What is the Third Eye? 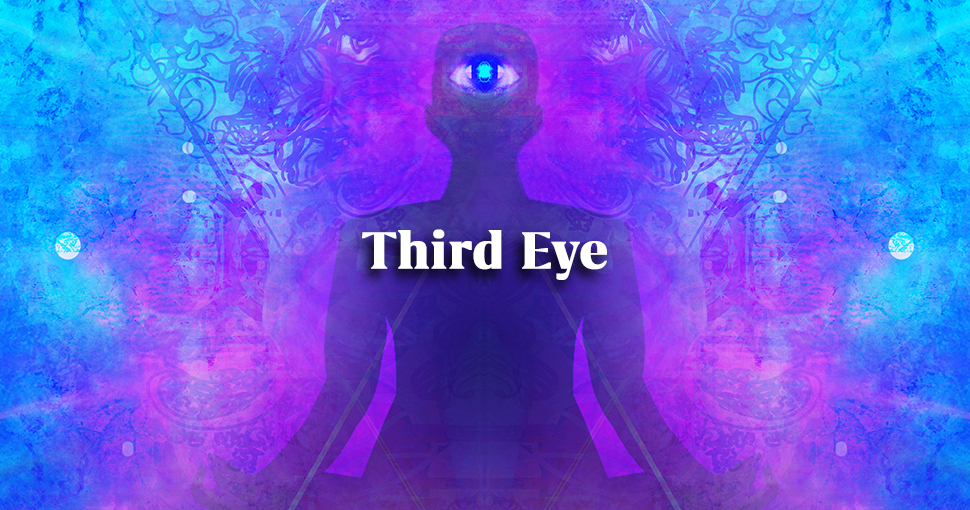 The third eye is a concept that exists in many cultures across the world. Sometimes known as the ‘Anja chakra’, the third eye is incredibly powerful as it is the centre of intuitive wisdom and spiritual guidance in the body. The beliefs about what the third eye represents differs according to culture and community, but the unanimous understanding is that it represents a ‘higher level’ of consciousness or spiritual perception than of our normal state of being. It is the idea that we all have an ‘invisible eye’, usually located somewhere on the forehead, that allows us to see beyond that of ordinary vision. When we become in tune with our third eye, we are said to become more knowledgeable, open-minded, perceptive and generally hold a greater understanding of the meaning of life. We may also be able to clear mental blockages and increase our spiritual clarity by tuning in. However, the third eye can cause issues by becoming overactive or blocked and stagnant. Everyone is thought to have a third eye, it is just that not everyone is able to easily tap into this aspect of our subconscious.

The Cultural Meaning of the Third Eye 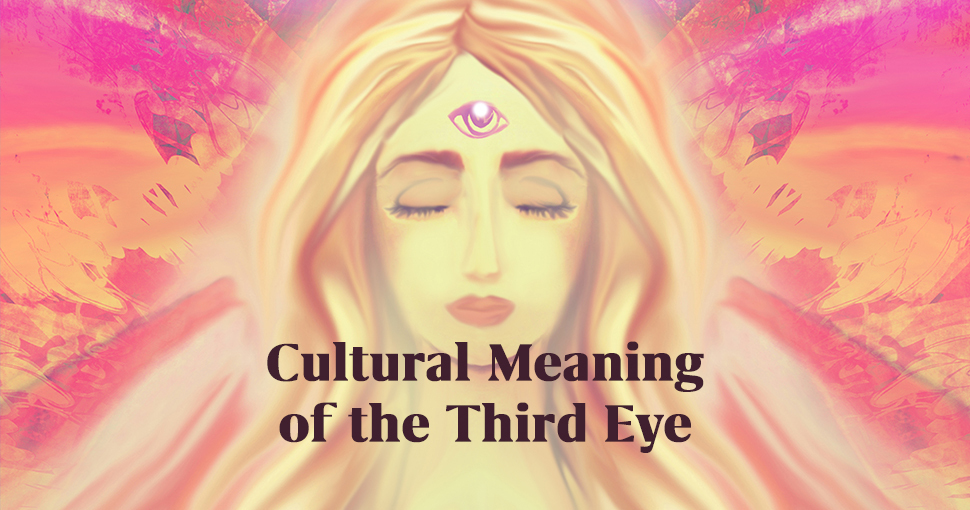 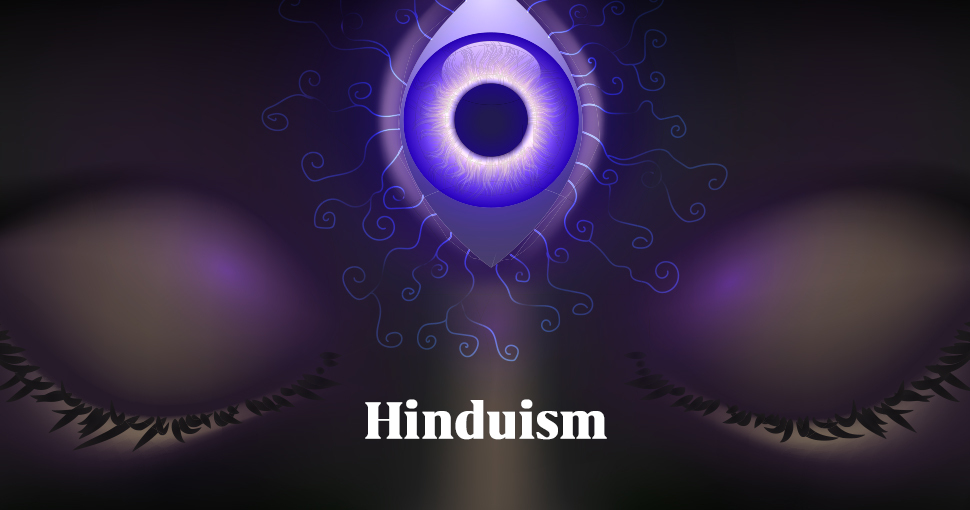 Hindu tradition cites the third eye as a portal to the subconscious mind and a direct path to Braham, the ‘ultimate reality’. The third eye is also believed to be connected with an individual’s sense of intuition and their ability to receive spiritual messages. In a sense, the third eye for HIndus symbolises a channel towards inner power that once activated, takes a person to a higher level of consciousness. Alongside this, meditation is central to the practice of Hinduism, and as the third eye is also referred to as the sixth chakra (named Anja), it plays a hugely important role in meditative practice. As such, the third eye is representative of focus, self-restraint and reflection. 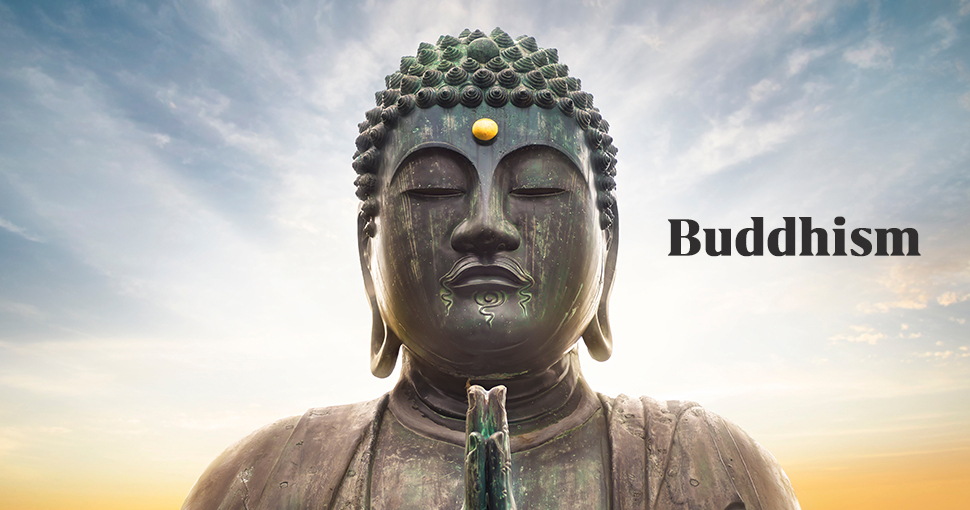 In a similar sense to Hinduism, the third eye in Buddhism is seen as the gateway towards achieving higher-consciousness. The third eye is particularly important for Buddhists as this current life on earth is thought to be one ofsuffering and we can only escape this suffering by reaching enlightenment. Additionally, if you are familiar with the typical depiction of Buddha, you may recall a dot between his eyes. This dot marks Buddha’s third eye and is a symbol to remind followers to remain ethical, peaceful and generous people - all ways of living that help a Buddhist to achieve a state of enlightenment. 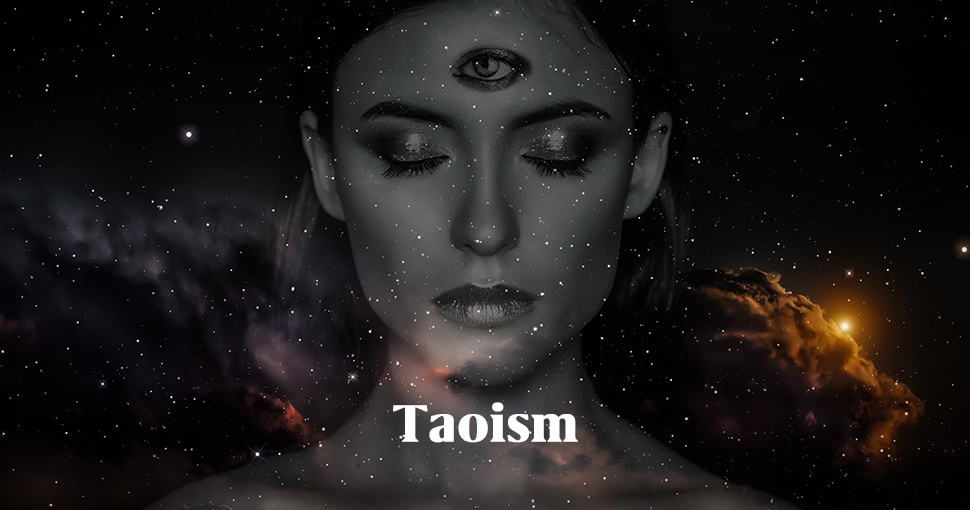 Taoism, alongside many other traditional Chinese religious sects, believe the third eye to be the source of a person’s wisdom and a pathway towards spiritual awakening. They also see the third eye as a tool that can be used to reach a more advanced meditative state, allowing meditators to tap into the vibrations of the universe. Just like in Hinduism and Buddhism, Taoists believe the third eye sits directly in between the eyes. The only difference is that once the third eye has been opened, it expands up into the middle of the forehead.

What Does Science Say About the Third Eye? 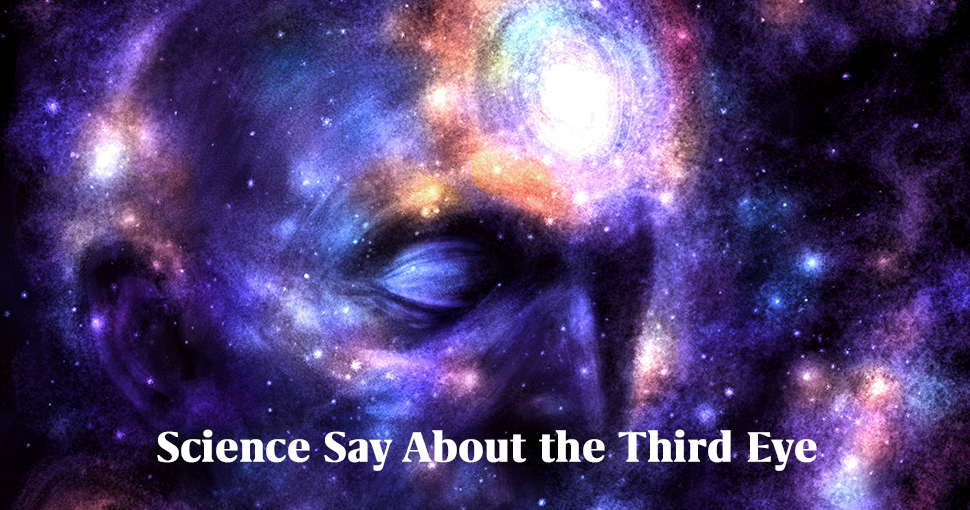 The concept of the third eye is not limited to purely spiritual fields. Even in the scientific community, there is an understanding of the significant role held by the pineal gland in the brain. The pineal gland is the brain’s light receptor, regulating sleep and producing hormones crucial to the healthy function of our sleep cycle. The gland is positioned right in the center of the brain, effectively in the same spot as the third eye. As sleep is so closely entwined with our mental, physical and spiritual wellbeing, it makes sense that science and spirituality have found some degree of common ground on this subject.

Not only this, but the chemical ‘DMT’ has led some scientists to question the reality of the third eye. DMT is a chemical secreted in the brain of a dying person and when this psychoactive drug is consumed, people often report an altered state of consciousness and an opening of the third eye.

Do I Have a Third Eye? 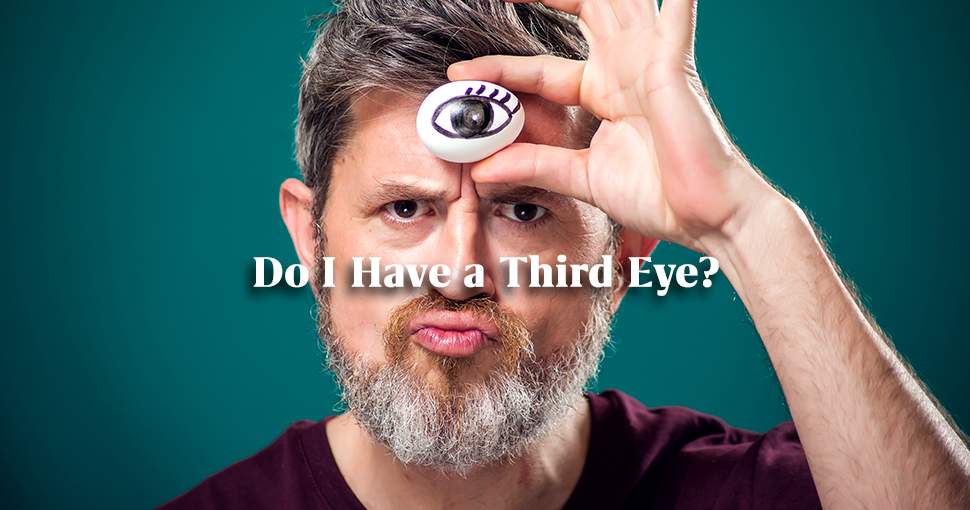 We all have a third eye, but few of us have successfully activated it. Think back to a time when you have had an unshakeable gut feeling that has turned out to be accurate. Or perhaps you may recall a time when you felt forcefully compelled to take a certain action that only made sense in hindsight. In all of these scenarios, you can be sure that you were finding the third eye. Noticing this behavior for what it is and making an effort to engage in it more often is the key to strengthening this portal within ourselves. Viewing the third eye as a sense in its own right, one that can be honed through a little extra effort, is useful.

What are the Dangers of Opening My Third Eye? 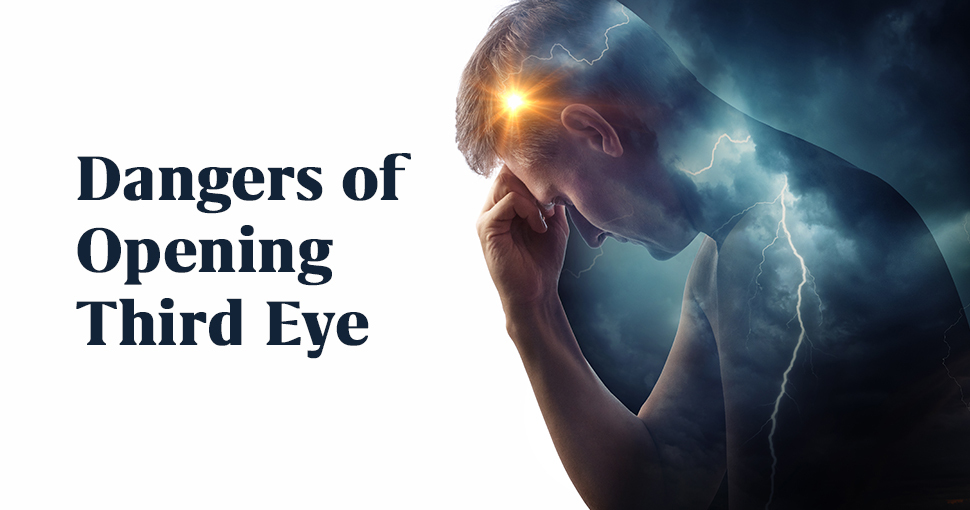 Many people worry that activating the third eye will introduce them to an altered reality that they won't be able to escape from. So, why is opening the third eye dangerous? If the process of opening the third eye is not done with caution, an individual may end up feeling overwhelmed by their new vision of reality. A rapid increase in intuition, spiritual wisdom and general intellectual power is likely to be difficult for some who may struggle to know how to control these newfound abilities.

Should I Open My Third Eye? 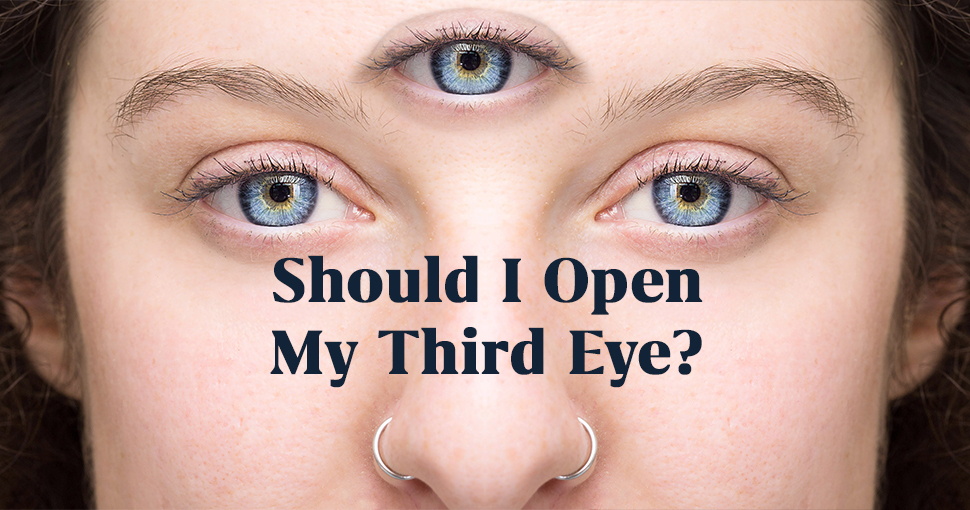 After reading the risks, you may be thinking, ‘why open the third eye at all?’ However, by taking the following advice and proceeding carefully, you will find that there are far more benefits to be had than drawbacks. After all, strengthening the third eye enhances a person's perception and helps connect them with other people with a similar energy. Long-lasting, meaningful connections are likely to arise as a result of opening the third eye. That being said, if you believe that accessing higher planes will not bring satisfaction or happiness to your life, that is also absolutely okay. Reaching an enlightened state is not supposed to be a part of everyone’s journey, so do not force the process.

How Do I Open My Third Eye? 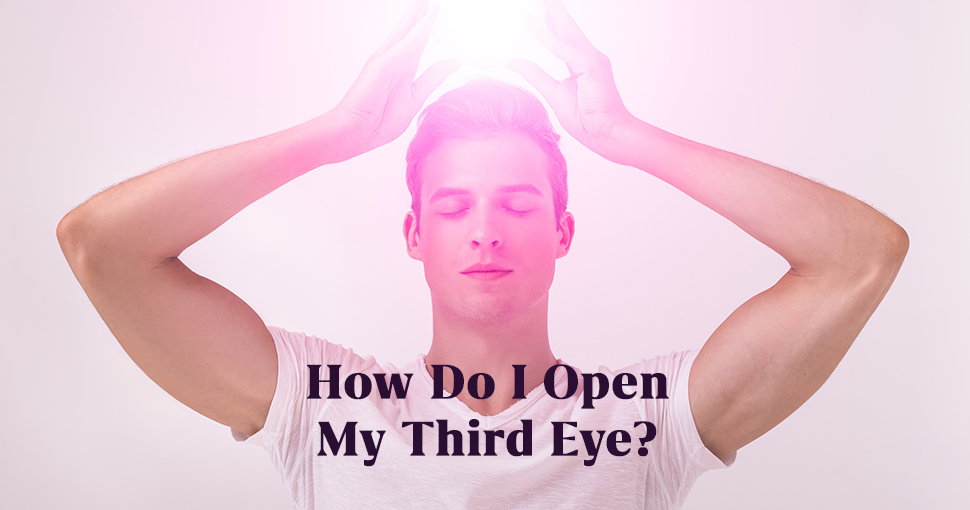 Developing your third eye requires time and patience. Ideally, it should become a daily practice. Spending at least 15 minutes every day meditating and visualizing the third eye on your forehead is a great place to start. At first, it may feel like a slightly redundant process, but after repeating this daily, you may begin to notice a physical sensation accompanying your mental image. Other than this, there is no exact formula or rule book that dictates how to open the third eye, but partaking in any spiritual activity that seeks to improve your intuition and connection with higher realms is crucial. Consider prayer, chakra yoga, affirmations and any other practice that intends to promote spiritual wisdom. Finding your unique journey is important too, but you must remember to stick at it and give it time. 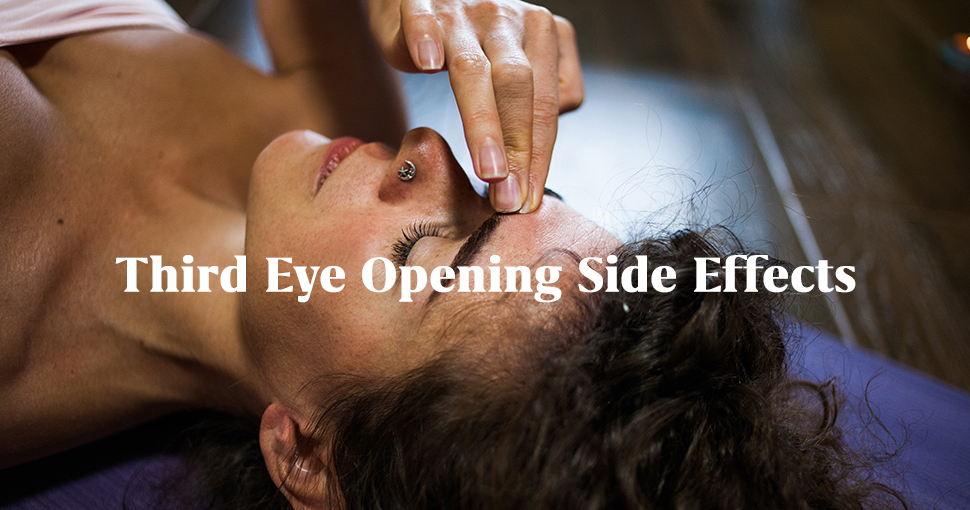 As the process is not exactly simple or easy, you may be finding it hard to tell if your third eye is open at all. Well, as the opening of the third eye can cause a series of side effects, you can make sure to look out for the signs listed below;

What is a Third Eye Blockage? 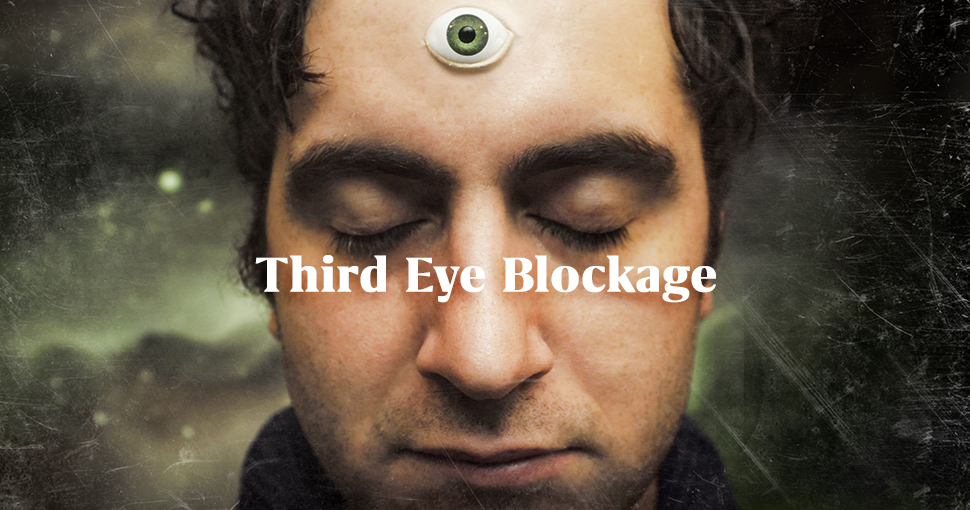 Just as we are able to open our third eye, we are also susceptible to blockages. If you are concerned that your third eye is blocked, look out for the signs that may indicate this is the case. For example, if you find yourself feeling extra forgetful, anxious or distracted, this can often be tied to issues of mental clarity associated with the third eye. In a more physical sense, if you are experiencing insomnia or a pain between the eyebrows, this too can be linked back to a blockage of the third eye. Many people report a general feeling of ‘fogginess’ in these instances.

I Opened My Third Eye, Now What? 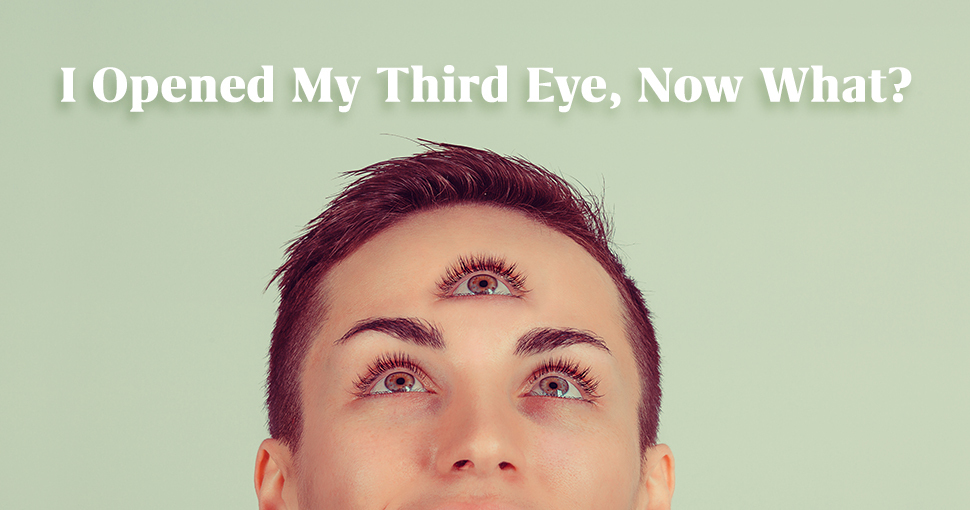 After successfully unlocking your third eye, you need to make a consistent effort to keep the third eye balanced. Continuing with regular meditation, just as is required to open the third eye in the first place, is a great way to maintain balance in this area. Not only this, but third eye protection is essential as the third eye is the portal to our higher selves. As such, protecting an active third eye may also require more involvement in chakra work, so meditating and performing yoga with the chakras in mind is useful. Reciting daily affirmations may also be a method you want to incorporate.

Can You Close Your Third Eye?

Most people want to embark on a third eye opening journey, so rarely do people wish to reverse the process. However, an overactive third eye may lead people to want to close it. It is common that chakras can become blocked and energy in the chakra can become stagnant, however, the third eye can also spin wildly out of control causing general disruption and imbalances.

Closing your third eye once it has been activated is a difficult process, but you can begin by imagining the third eye as a window. After this, make sure to sit quietly for a few minutes. Focus your attention on the third eye once you've entered a light meditative state. Picture it as a window through which life flows, as a current of water entering your body and mind. But rather than letting this energy remain stuck in the psyche, visualize it rushing down through the other chakras and out through the bottom of the feet. Continue to allow the rushing sensation to flow throughout, and notice yourself growing calmer and more at peace. Soon, you should feel urged to shut the window and you will notice the darkening of your mind. Things will feel slower, quieter and your prior perception of reality will take over.

Learning how to tune into our third eye allows us to reach a higher level of consciousness than we will have ever experienced before; we grow in spiritual wisdom and gain an incredible sense of intuition. However, sometimes we may struggle to cope with our new found reality, so it is important to not rush into the process without caution. That being said, we can close our third eye as readily as we open it, we just need to understand the repercussions of both states of consciousness.