July brings joy and celebration to many of us as it sits right in the middle of the warmest part of the year. In this month, we experience longer days, we plan exciting vacations and may spend lots of time at the beach. July is also the fourth of seven months to be 31 days long. In the United States, July is probably most famous for the celebration of Independence Day on July 4th. For the Southern Hemisphere, July marks the middle of winter with some of the coldest temperatures of the year. In the Southern Hemisphere, July is equivalent to the month of January in the North and vice versa.

If you are born in July, you may be interested to learn about your birth month gemstones, birth month flowers, and the zodiac signs you may be a part of. Otherwise, you may wish to know which signs are best matched to those born in July. There is so much fascinating history about the beautiful month of July that it would be a shame to overlook it. Read on if you want to learn more!

The History of July 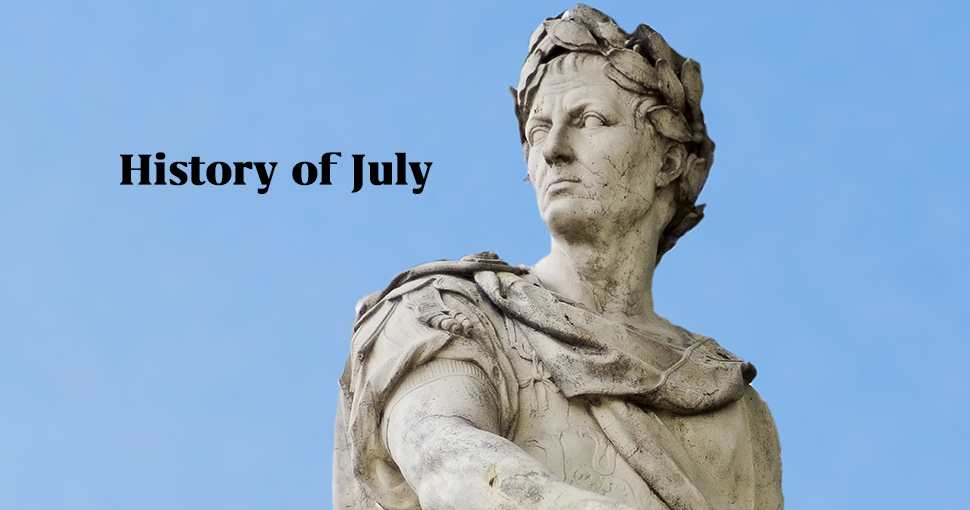 July is named after the infamous Julius Caesar of the Roman Empire. As the ancient Roman calendar had only 10 months, July was formerly known as “Quintilis” (meaning “fifth month”), but this was changed to July in honor of Caesar’s death when the reformed Julian calendar was introduced. Although, whether or not July’s association with Julius Caesar is a good thing is certainly up for debate. After all, he was an important Roman general whose assassination became a focal point of European history. However, he is also seen as a ruthless tyrant, conquering the region of Gaul (Now Italy, France, Holland and Belgium) and slaying lives recklessly. However, on a completely different continent, July is important for a very different reason. The Native Americans revered July for its full moon, named the “Buck Moon”. It was named this as, in July, male deer began to regrow the antlers that they shed in spring. As such, many Native Americans saw July, the male deer and the Buck Moon as an important symbol hinting that the peak of summer had finally arrived. 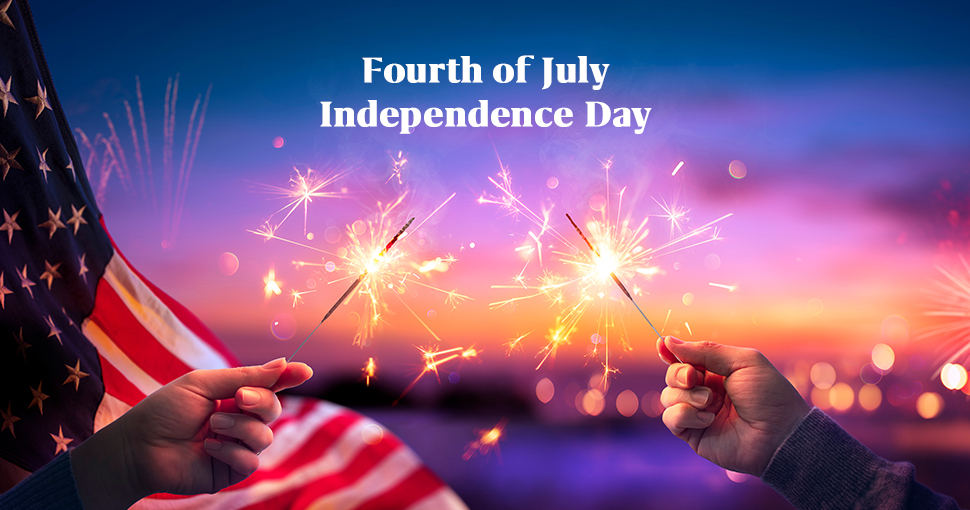 Independence Day is a federal holiday in the United States, held on July 4th, honoring the ratification of the Declaration of Independence from the British on the same day in 1776. The Declaration of Independence was signed by Congress and declared that the thirteen American colonies of the time were severing their ties with the British monarchy under King George III. Fast forward nearly 250 years, US citizens still celebrate this day of freedom. Fourth of July, as the day is colloquially known, is now associated with fireworks, barbecues, festivals, sporting events and meeting up with family. The energy in the air at this time of year is electric and the variety of festivities held can be attributed to the fantastic weather in North America during July. So, while July is important across the world for various different reasons, this sunny month holds a special place in the heart of the United States for its connection with independence, freedom and celebration.

What is the Birthstone of July? 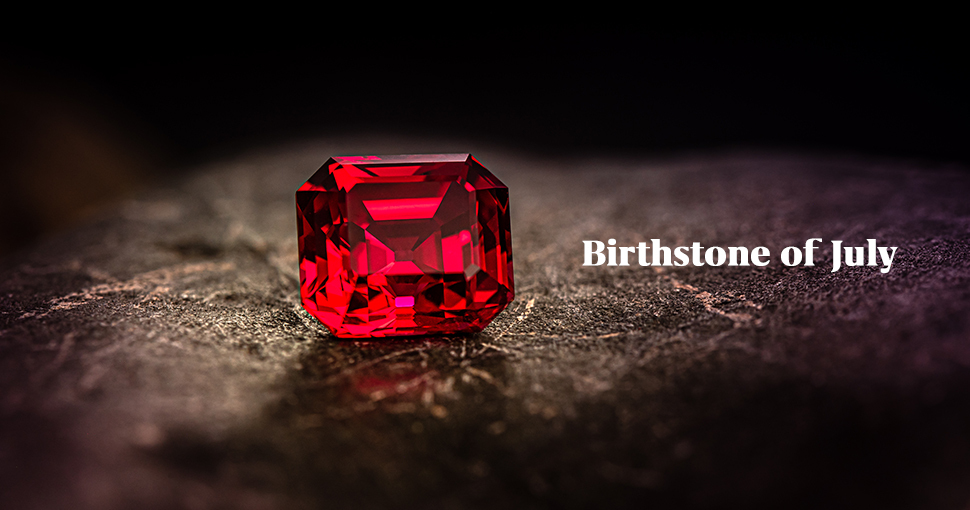 Birthstones first became a concept in the 16th Century in eastern europe. Individuals at this time believed that those who wore or carried the stone associated with their birth month would be subject to good fortune, protection and shielding from negative energy. The tradition has since spread across much of the world and people nowadays still enjoy both wearing and gifting their loved ones with their specific special birth gems. With that in mind, July’s birthstone is the luxurious and revered Ruby.

Rubies are a standout stone and one of the most valuable gems out there. The beautiful, deep red color of the precious ruby has solidified its status as an exceptionally special stone in most cultures. For one, rubies have been associated with royalty as the intense red color is often likened to the blood of enemies. Regardless of its connotations, rubies are an undeniably powerful and striking stone, so their place in royal palaces and on royal attire is fairly unsurprising. African chiefs were also known to wear rubies as it was thought the stone would sharpen their minds and improve their leadership skills. Moreover, in ancient Hindhu tradition, rubies were referred to as the “King of Gems'' and were thought to protect wearers against evil spirits and energy. For other tribes across the world, rubies were associated with victory and strength, and for many more, the red gem evokes feelings of love and passion. In fact, rubies are a popular choice for engagement rings as the stone is so incredibly magnetizing. 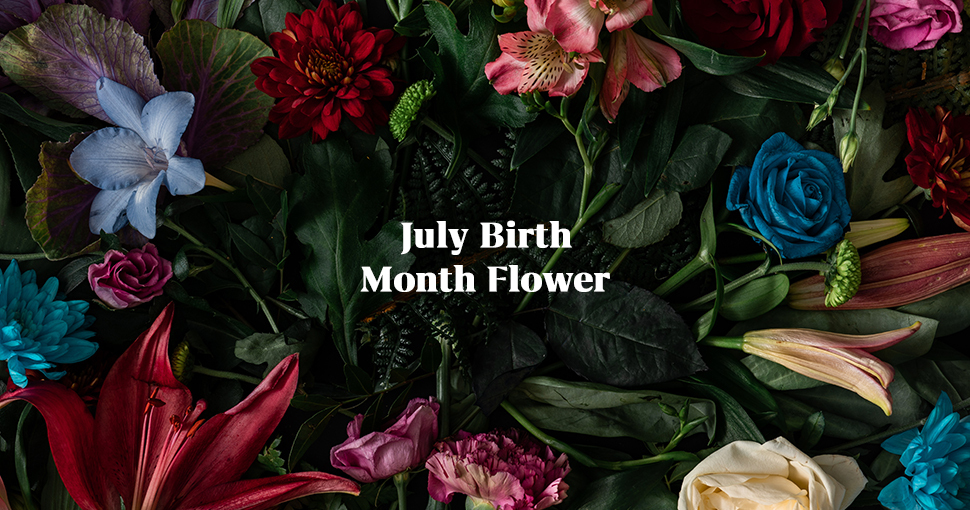 Delphinium, or sometimes known as “larkspur” is a stunning and vivid flower that makes a bold impression in a summer garden. They are typically a bright blue color and famously stand tall and proud, like triumphant towers. In fact, delphiniums even can grow to over six feet tall so draw plenty of attention. Interestingly, despite their larger-than-life appearance, delphiniums are said to symbolize affection, peace and familial love. While these are soft and kind connotations, the delphinium is also known to be toxic to both humans and animals. As such, many people believe the flower represents the power in standing up for oneself. July’s two zodiac signs arguably embody the two sides of delphinium’s double-edged sword.

Also commonly called the lotus flower, water lilies are July’s second birth flower. These white and serene flowers are slightly different from most birth month flowers in that they sprout from a lily pad on the surface of water. They aren’t found in bouquets or gardens so instead make a beautiful addition to ponds and water features. Their majesty is undeniable though. In fact, Monet’s “Waterlilies” painting is one the painter’s most famous pieces of work as the painting has such an ethereal, dreamlike feel to it. Unsurprisingly, waterlilies are commonly associated with beauty, peace, balance and even a connection to the spiritual world. 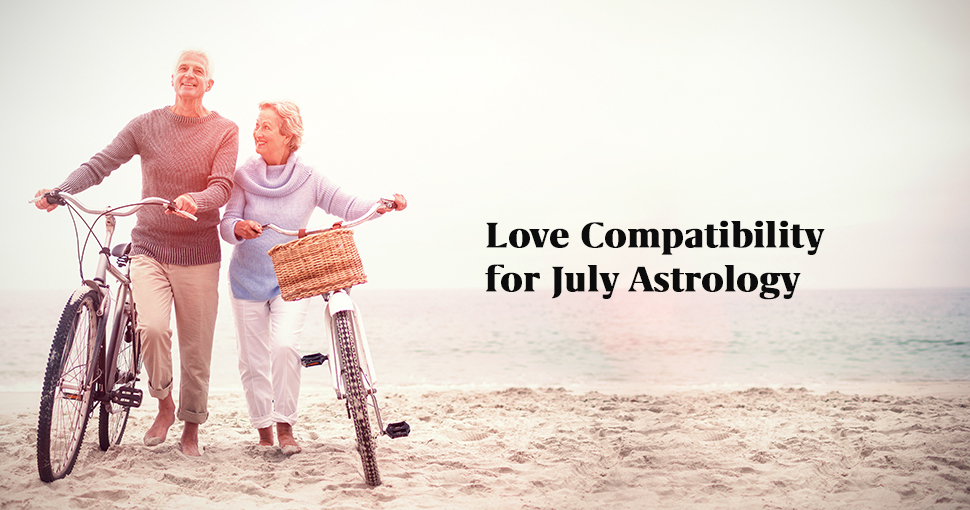 If you are a July baby, you will either be Cancer or Leo. Cancers are born between June 21st and July 22nd and are an emotional yet loving Water sign. They are also known to be incredibly loyal friends who remember the little details and put in extra effort to make everyone feel special. Leos, on the other hand, are far more bold and confident. This powerful, self-assured sign loves to be the center of attention and is born between July 23rd and August 22nd, making them part of the Fire elemental group. This makes Leos the life and soul of the party, although prone to ruffling some feathers. 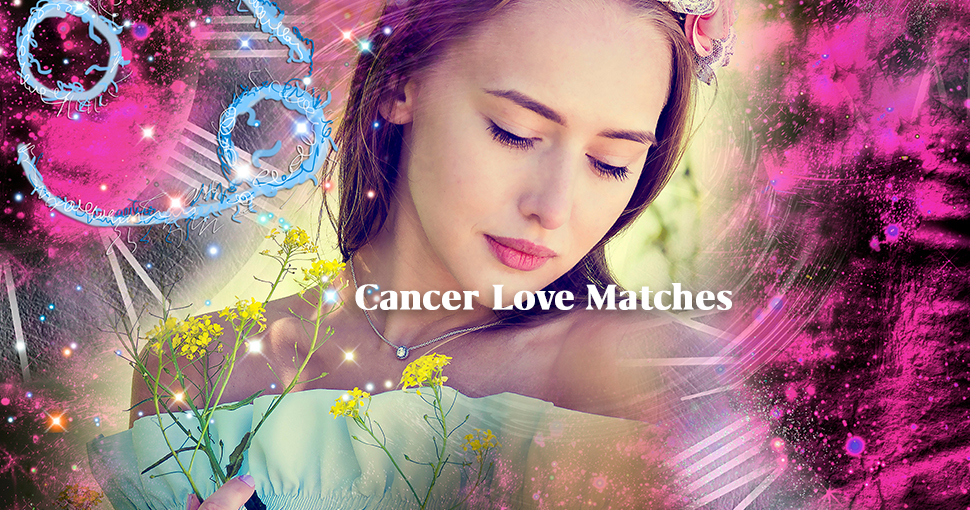 The Cancer zodiac sign is known to be among the most sensitive and intuitive of all signs of the zodiac. They feel intense empathy for those around them and often feel a responsibility to fix their friends’ problems. Many people find Cancers very comforting to be around as they seem to possess a calming, spiritual energy about them. However, as a Water sign, Cancers can have a hard time keeping a lid on their emotions. They are prone to acting out or catastrophizing situations simply because they feel emotions far more vividly than most. They lead with their hearts rather than thinking with their heads, which is fantastic when it comes to the early, passionate stages of a relationship, but less helpful when arguments inevitably arise. Cancers need to learn to channel their calm, comforting energy in these times rather than losing their cool and breaking down. Further to this, as Cancer is ruled by the moon, their emotions and behaviors are significantly impacted by lunar cycles. Water signs in general are closely tied to the moon’s activity, but Cancer feels this pull far more.

In love, Taurus and Cancer make an excellent couple. For one, Taurus can be blunt, stubborn, and a little cold to other people's feelings, while Cancer makes the perfect counterbalance of sensitivity and compassion. Furthermore, Taurus is a sign that favors physical intimacy, a love language that Cancer craves. Also, it is generally considered that Taurus offers many practicalities in a relationship and, in turn, teaches Cancer not to get too caught up in their emotions. Conversely, Cancer teaches Taurus how valuable tact can be.

In spite of Cancer and Scorpio’s differences, the two signs share profound similarities that lead to an incredibly passionate bond. As two Water signs, they both find unity in their strong emotional intuition and in their ability to connect with others. Scorpio can also provide some of the heat that Cancer lacks and thus creates an incredibly exciting relationship. 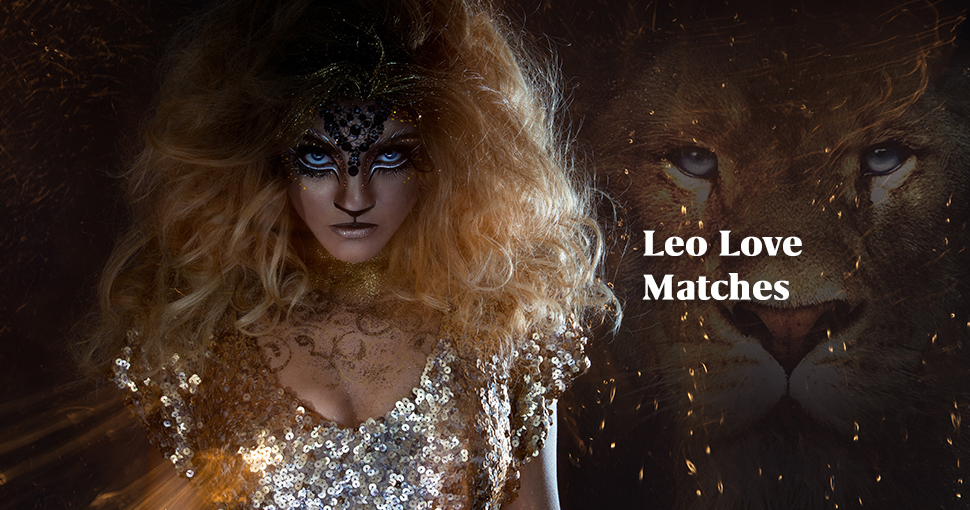 Leos value honesty above all else. They have bold and brash opinions and aren’t afraid to let them be heard. That said, they appreciate the same from others and want transparent dialogue, regardless of how uncomfortable it may be. However, Leos are prone to causing issues in relationships on account of their naturally flirty disposition. To Leos themselves, this flirtation is harmless banter, but to most partners, it pushes the boundaries of what is acceptable in a relationship. Put simply, Leos seek to find fun in everything they do and don’t take life too seriously, which, for some, is an attractive trait but certainly isn’t for everyone. Despite their flirty antics, Leos make incredibly loyal friends. Just like a lion defends his pride, Leos make a fierce force to be reckoned with. You can rely on a Leo friend to launch into battle for you, making them a comforting person to have in your crowd. On the other hand, Leos can be highly sensitive and secretly appreciate a bit of tender loving care. They are known to put up walls and present the image that everything is fine-and-dandy, but these fiery individuals need just as much nurturing as the rest of us.

Gemini's communicative nature is highly compatible with Leo's burning desire to discover and learn. Gemini's whimsical nature, coupled with Leo's loyalty, results in a relationship that is meaningful yet lighthearted, with the potential to last forever. This couple combines pleasure and adventure in a way that makes them the perfect party guests and the life and soul of any occasion.

Do you still want to know more about the birth month of July? There are many resources at Mysticsense that can guide you with your learning and provide insight for any other questions you may have. Get started learning more about July at Mysticsense today!