Home / Articles and Media / All About Air in The Four Elements

All About Air in The Four Elements 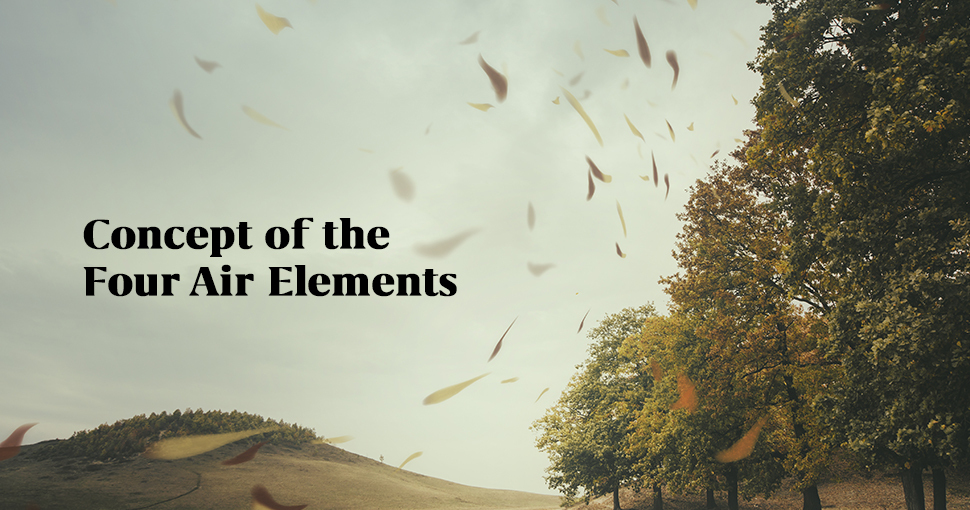 The concept of the Four Elements has existed throughout many different ancient civilizations and was first posed by Greek philosopher, Empedocles. While the names of the Four Elements (and even the number of them) has varied quite some bit, their principle message is about balance. Balance within the physicality of earth, within our astrological charts and even within the human body itself. In fact, in Ancient Greece, it was believed that the Four Humors of the body directly corresponded to the Four Elements, and when these Elements were out of whack, we would encounter physical problems. So, with that said, the Four Elements in Astrology consist of Fire, Earth, Air and Water. Each of these elements rules three zodiac signs and governs certain traits and characteristics. 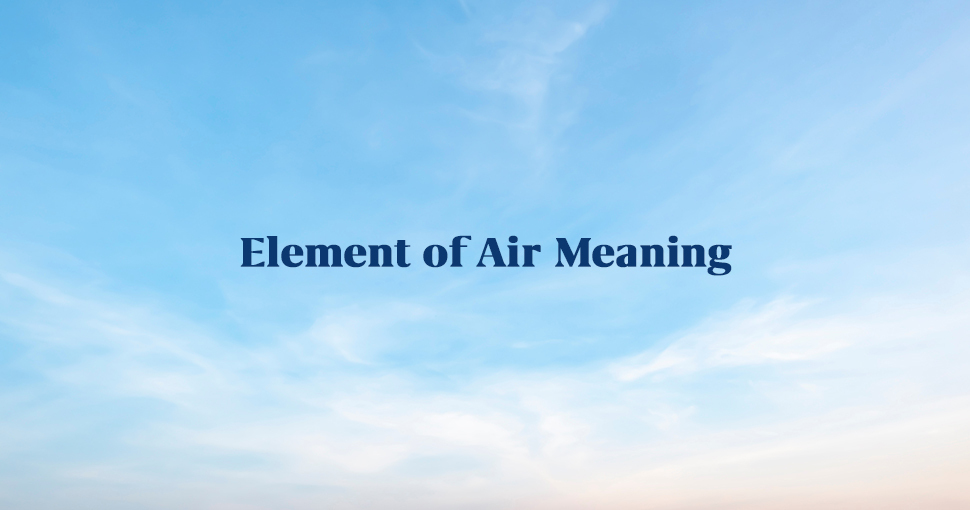 The one thing that really characterizes Air is mental stimulation. This is the element of big thinkers, ponderers and dreamers who constantly seek to solve puzzles and find answers about the world around them. In the zodiac, Air signs are the epitome of being unable to “switch off” and are known to spend many nights tossing and turning with a whirring mind. Not only this, but Air is closely tied to expression and communication. As such, Air signs are typically witty and make fantastic conversationalists, knowing exactly what information to pick up and relay when interacting with others. That being said, Air’s strength in communication can be its downfall when it comes to decision making - Air is known to overload itself with too much information which can make reaching conclusions somewhat challenging. Put simply, they can be massive overthinkers, impacting their day-to-day efficiency. However, alongside these qualities, Air is also admired for its free-thinking and open mindedness. Just like the air around us is able to contort to fill all empty space, Air signs are flexible people, possessing the motivation to truly understand other people’s experiences. They love to be met with new ideas and seek to view the world through the perspective of others. Although, this also means that Air signs can be impulsive and erratic - as they are constantly searching for the next bright idea and eager to try completely new experiences, their schedules are certainly chaotic. Due to this, people of this elemental group are often seen as non conventional or norm breakers. However, their nonconformity is not to be confused with militancy or a sense of principle, rather, it is a result of their flighty, free-spiritedness. In other words, Air doesn’t care what others think, and is far happier when going with the flow.

What are the Air Zodiac Signs? 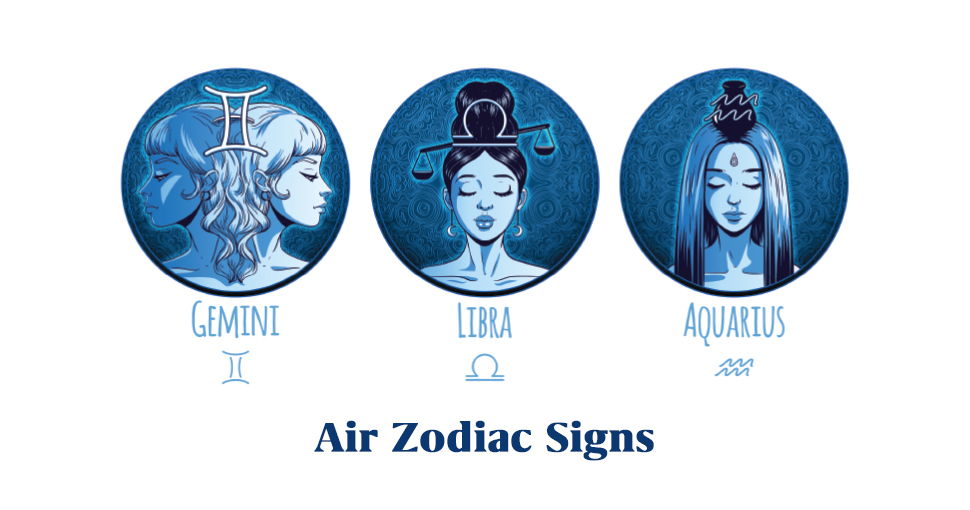 Ruled by the element of Air are Gemini, Libra and Aquarius. All of these signs are beautifully unique but share many of the qualities exuded by Air.

Gemini’s star quality is their sense of humor. They are incredibly light-hearted and optimistic beings, always being able to see the funny side of things. They also make fantastic friends as they have a relentless sense of curiosity and can inject fun into even the most boring situations. However, they are also stereotyped as unpredictable and for having split personalities. One moment they may feel social and enthusiastic, while the next, they may find themselves growing impatient or frustrated. In sum, just like the irregularity of a gust of wind, Geminis can find controlling fluctuations in their mood harder than most.

While sharing Gemini’s intellectual curiosity and light-hearted attitude towards life, Libra's strength lies predominantly in their sense of individuality. These people are wholeheartedly true to themselves and don’t care what anyone else has to say for it. As possibly the most authentic sign in the zodiac, you aren’t likely to see Libra caught up in other people’s business or involved in unnecessary drama. Putting on a show or trying to gain validation from others is certainly not at the top of a Libra’s priority list. They would much rather spend their time honing personal skills and engaging in their favorite pastimes, or in other words, broadening their mind.

Like Gemini and Libra, Aquarius shares a similar affinity for the pursuit of knowledge and a streak of nonconformity. However, their loudest trait is their humanitarianism - these individuals want nothing more than to seek truth and justice while exposing wrongdoings. They are ambassadors of freedom, equal rights for all and are staunch supporters of the underdog. As such, it is not uncommon to find Aquarians working in charitable fields as it allows them to teach others and better the world. With this in mind, while championing the freedom of others, Aquarians similarly hate to feel constrained. They want the freedom to live to their full potential, and as a result, regularly inspire others to do the same. 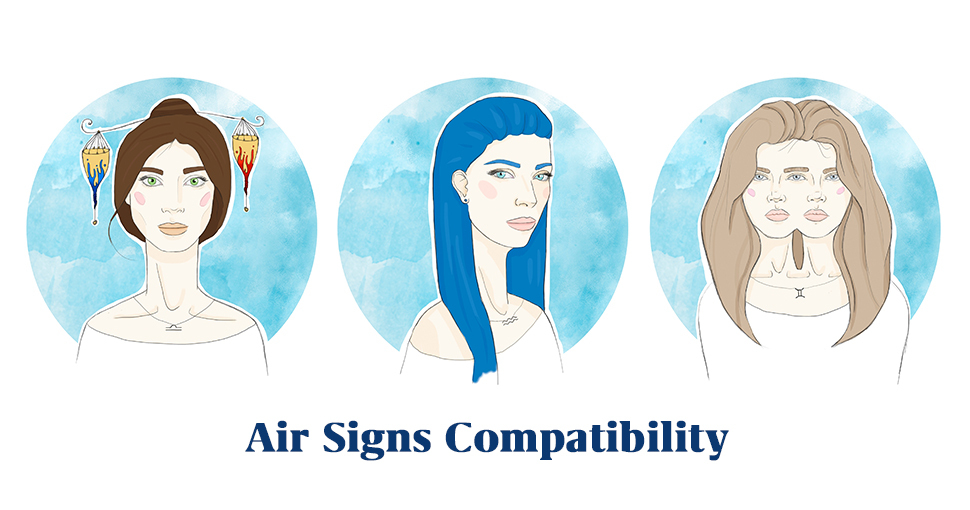 The Four Elements do not stand alone. They are all deeply entwined with one another and have the ability to both counteract and balance as a group. When we talk about compatibility between the Four Elements, we are not only referring to our own relationships with those of other elemental groups, but also looking at how the elements themselves play a role in our whole lives; we can gauge interesting insight into ourselves and our approach to life by looking at the distribution of each element in our natal charts. Also, by understanding how the Four Elements interact in a physical sense, we better grasp the symbolism and interplay of elements within ourselves and others too.

Fire is a powerful, assertive element. Fire knows exactly what it wants and how to get it, even if that means stepping on a few toes in the process. On the other hand, Air finds itself far too concerned with deliberation; for Air, every decision or every action needs to be mulled over extensively in order to reach the most logical conclusion. While productive in theory, Fire teaches Air that sometimes we need to have faith in ourselves and to dive headfirst into action. In short, Fire wants air to seize the day and take control a bit more! That being said, these two elements do make a compatible team in other ways. As Fire cannot burn without Air, we see that these elements have a powerful dynamic with the ability to make a profound impact in their environments. Air brings unique, intellectual perspectives to the table while Fire has the passion and drive to turn it into reality.

In a relationship, conflict is not unlikely to arise between these two elements. Fire shows its love through intimacy and action, while Air gains more by discussing what each partner loves about the other. However, this pairing is likely to learn a lot from one another - with Air embracing ‘doing’ without ‘thinking’ more and Fire learning to think more about potential repercussions. These two are a whirlwind to say the least, but make for a very exciting, dynamic coupling.

By the laws of nature, Air touches all of Earth, but only on the surface. We see the same dynamic between people of these two elements too, with Air’s flighty, whimsical self being unable to penetrate the tough exterior of Earth - Earth is the element of rigidity, structure and caution meaning these people are hard to read and find letting their walls down a challenge. Conversely, Air is almost completely opposite in this facet, being communicative and highly adaptable from situation to situation. While their differences are stark, these two elements aren’t the type to enter a heated debate or passionate conflict. Instead, they are likely to hold respect for one another, but pass each other by.

From reading the above, you probably won't be surprised to hear that romantic compatibility between Air and Earth is also lacking. This is because Air is constantly stuck in their head, thinking broadly and imagining all sorts of hypotheticals. On the other hand, Earth is analyzing the world around them with extreme reason and practicality. Not only this, but a sudden change of schedule or a disruption to routine is enough to set Earth off course, but Air wants to live life with an added hint of spontaneity. So, when it comes to relationships, it can be difficult for these two to meet on the same page and share the same approach to life.

Water and air are the elements of the most similar composition. Without moisture, air would cease to exist, and without air, the oceans would be unable to ebb and flow. This physical relationship mirrors that between (and within) ourselves also; Water teaches Air to understand the importance of emotions and expressing one's feelings, while Air shows Water how to communicate with greater impact. Just like the fluidity of both air and water in a physical sense, these two almost perfectly fill in each other’s gaps. These two really do make a solid team, sharing a similar affinity for spirituality and creativity.

On paper, the compatibility between Air and Water is enormous. However, in relationships, it is far more hit and miss. In some Air-Water relationships, both partners can grow by learning the strengths of the other, while in others, discord is more likely. Firstly, Air is able to teach Water how to communicate their emotions rather than letting them simmer and be left undealt with. In turn, Water can bring out the softer, more sensitive side of Air and show the element how to use their emotional intelligence in a way that best comforts others. Air may find Water’s intense emotionality disruptive to their forward-thinking nature and Water may grow frustrated at Air’s answer for everything - for Water, sometimes simply sitting and truly feeling the waves of emotion is the best medicine. For Air, where verbal communication is everything, this mentality can be hard to understand. However, in simple terms, these two elements have plenty of potential if they are willing to take on the lessons provided by one another.

How to Balance Air Element?

Despite our fundamental qualities, all of us can be passionate, whimsical, emotional and grounded from time to time. We need aspects from all four of the elements to help us stay balanced and centered throughout life, even if these elements aren’t evenly distributed within our natal chart. In fact, one way to achieve this sense of balance is by imagining the physical qualities of the elements. For instance, Water nourishes the Earth, while Fire cannot burn without Air. Air influences the movement of Water, while the stability of Earth can be decimated by Fire. However you wish to picture it, the symbolism behind the harmony between the four elements is stark. So, with this in mind, a person with a lot of Air in their natal chart is likely to be incredibly astute, intellectual and a fantastic communicator. However, they may benefit from taking on the lessons of Water by tuning further into their emotions, of Earth by remaining grounded and of Fire by learning to turn daydreams into reality.