Home / Articles and Media / The Minor Arcana in Tarot

The Minor Arcana in Tarot

What is the Minor Arcana? 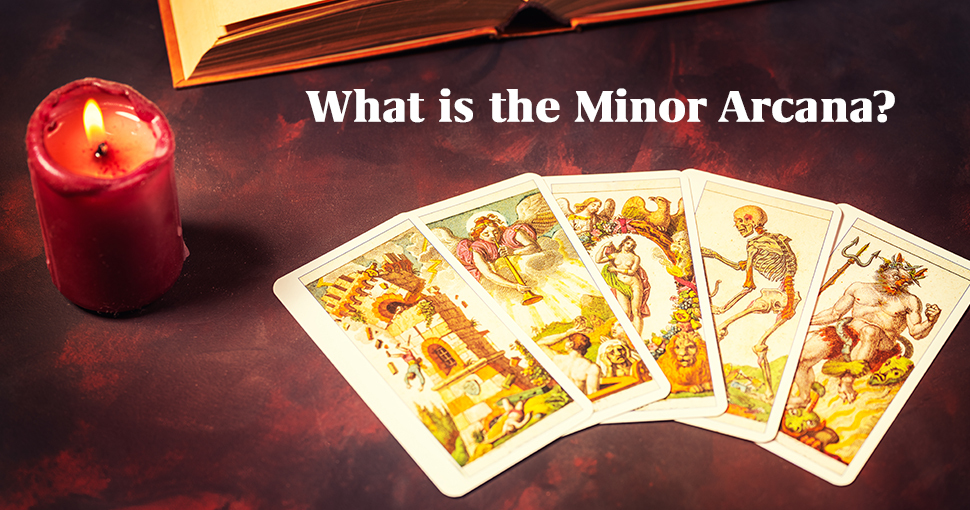 In a Tarot deck, there are 78 cards. Within these 78 cards, there are 22 Major Arcana and 56 Minor Arcana. The word Arcana simply translates as ‘secret’ or ‘mystery’ in Latin. The Minor Arcana is sometimes referred to as ‘Trump’ cards as Tarot was once used as a card game many centuries ago. The Minor Arcana cards are numbered from one (known as the Ace) through to ten. Following these ten cards, there are four court cards depicting royalty and noblemen in a similar way to a standard deck of cards. While the Minor Arcana may not have the same level of power or significance as the Major Arcana, they are still vital in telling a story and adding color and detail to a person’s readings. The Minor Arcana cards tend to show events which are temporary and passing quickly through the life of the questioner. 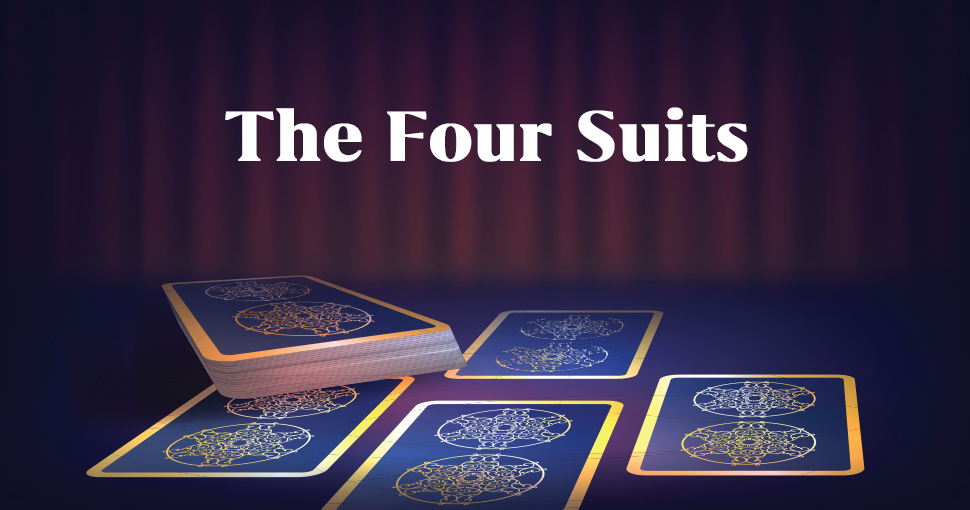 With this in mind, all of these cards are divided into the four suits of Wands, Cups, Pentacles and Swords. As each of these suits possess their own story, connotations and message, learning the meaning of each card in the Minor Arcana is not as daunting as it first appears. The key is to engage with the overall ‘feeling’ presented by the four suits.

Tarot reversed is an easy concept to pick up. You may be tempted to think that when a Tarot card is pulled in a reversed position, that it represents the opposite of the upright meaning. However, this is not the case - it far more closely symbolizes a diluted version of the upright meaning, pointing to potentialities that might occur if action isn’t taken and being far less definite in general. In other words, when the cards are reversed, it suggests the questioner has the ability to control events and make positive changes yet they are hesitating or procrastinating in the meantime. Sometimes people want change but they are frightened, or at the very least they don't want to put in the effort required to do so. In these cases, this is where reverse cards point to potentialities which are unlikely to be realized until action is taken. 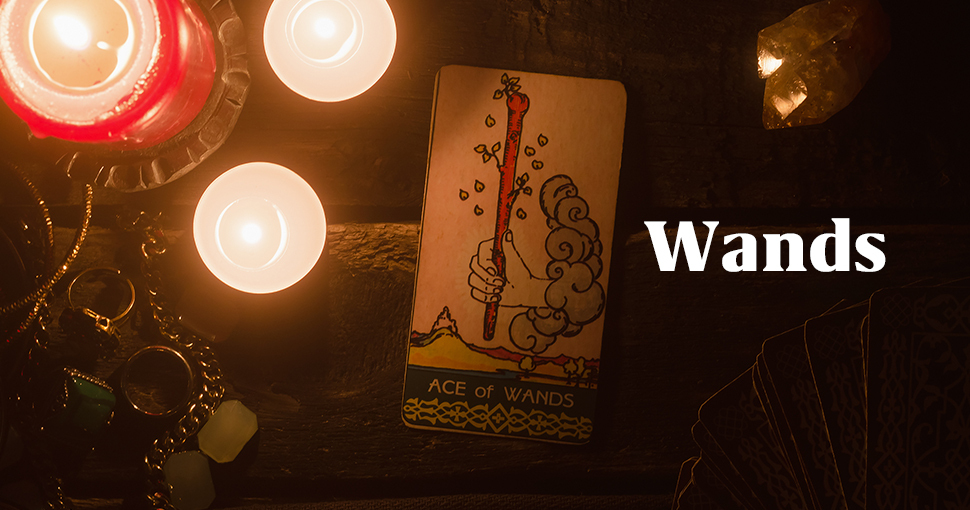 In an upright position, Wands represent;

In a reversed position, Wands represent;

The Wands suit represents what is important at the core of our being. They address what motivates our egos, what sparks our interests and how we perceive ourselves. Wands are also all about movement, action and the birth of projects. They can be indicative of a person who is juggling many initiatives all at once, keeping them extremely busy. All Wands are also indicative of our everyday activities, like working in the office, being at home or spending time outside in nature. Although they are the suit of action and decisiveness, they can still represent the more mundane aspects of our daily routines.

However, the more negative aspects of wands include delusion, egotism, recklessness and a lack of purpose. In other words, all of the moments in life when our ambitiousness gets ahead of itself.

When referring to time in a tarot reading, the suit of Wands typically represents the Spring season and a timing of weeks. So, if a client is asking ‘when’ a situation is likely to occur, a Wands card can indicate this event may occur relatively soon - in a matter of weeks.

Wands in the Zodiac

Wands correspond to the element of Fire and as such, relate to the Fire signs of Aries, Leo and Sagittarius. As the element of Fire is linked to inspiration, creativity, energy and ambitiousness, the Wands suit symbolizes these same themes of passion and drive in an individual’s life. When Wands appear frequently in a single Tarot reading, it likely indicates that the questioner has been recently successful in their goals and received some sort of well-deserved acknowledgement or reward for these efforts. In a positive context, Wands Tarot cards validate the questioner's journey and encourage them to tap into their ambitions even further. In a negative context, they may warn the questioner to reign in some potentially counterproductive patterns of behavior. 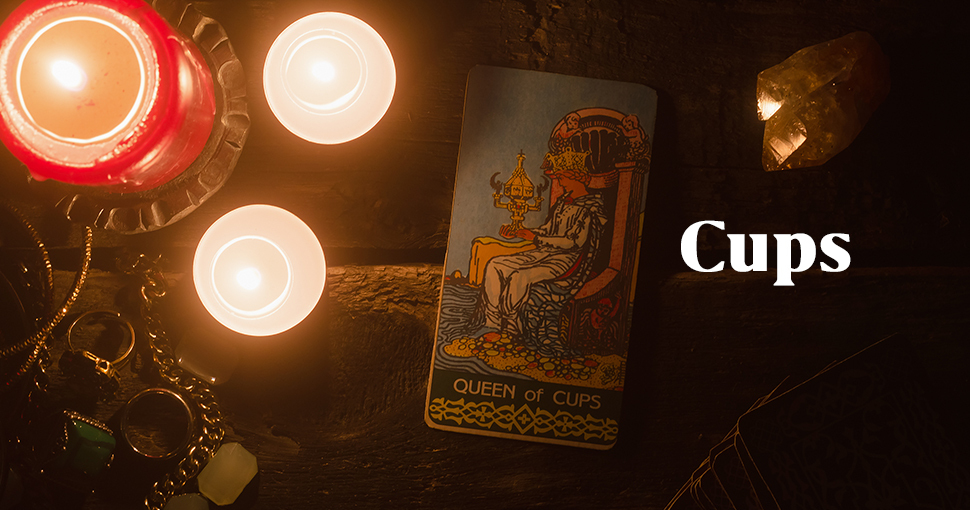 In an upright position, Cups represent;

In a reversed position, Cups represent;

The Cups suit rules our emotional, sensitive and egalitarian nature. People represented by Cups are usually artistic, loving and charitable with a fondness for animals and a respect towards nature. They are also often very affected by suffering in others. Alongside this, Cups symbolize our family dynamics, our friendships, romantic relationships and, above all, our feelings rather than our decisions or actions. Cups mirror how we feel about the world around us and how we manage to connect to others on a spiritual level.

The negative aspects of the suit of Cups include extreme emotionality or, conversely, a complete detachment from emotions altogether. They can also represent fading love, unhappy emotions or an inability to communicate properly. People represented by Cups in a negative context may also lack compassion or live in an unrealistic version of reality.

In terms of timing, the Cups suit traditionally represents the Summer season. If a client is asking ‘when’ a situation is likely to occur, a Cups card can indicate this event may occur very soon - in a matter of days.

Cups in the Zodiac

Cups correspond to the element of Water and as such, relate to the Water signs of Pisces, Cancer and Scorpio. The suite of Cups is associated with the qualities most often attributed to water signs, such as emotional receptivity, relational fluidity, intuition, and psychic ability. These qualities lend an emotional depth and perception to experiences of grief, friendship, heartache, and erotic connection. For example, the Three of Cups in a reading will signify strong friendship, building of community, creative collaboration, and reciprocity from those in your chosen circle. On the other hand, the Five of Cups in a reading signifies a person who is full of regret, someone in mourning, someone who can’t perceive the blessings and offering before them because their vision is obscured by the ghost of what feels lost and irretrievable.

In an upright position, Pentacles represent;

In a reversed position, Pentacles represent;

The Pentacles suit deals with the physical and external side of our existence, reflecting the outer manifestations of our career, finances and productivity. They symbolize what we make of our lives through our environment and how we shape and grow it. Pentacles are very much about all that is tangible rather than cerebral.

The negative aspects of Pentacles include being acquisitive, greedy and overly materialistic; where the love of money begins to tarnish the soul. Overindulgence and the neglect of one's health is also indicated by this suit in the negative position. Pentacles representing people at their worst show recklessness and the squandering of money. If not these traits, they can also represent individuals that are overly focused on career to the detriment of family and loved ones.

In terms of timing, the Pentacles suit traditionally represents the Autumn season. If a client is asking ‘when’ a situation is likely to occur, a Pentacles card can indicate this event may occur a long way into the future - perhaps even years ahead depending on the question being asked.

Pentacles in the Zodiac

Pentacles correspond to the element of Earth and as such, relate to the Earth signs of Taurus, Virgo and Capricorn. These Earth signs symbolize a sense of groundedness, reality, humility, practicality and material manifestation. Thus, just like in Tarot, these qualities are much the same for the Pentacles suit with the cards mirroring personal growth, sustaining one’s wealth, improving on physical health and making solid plans for the future. In short, the suit of Pentacles deals with Earthly matters, those that ground us, support us, and keep life running smoothly. 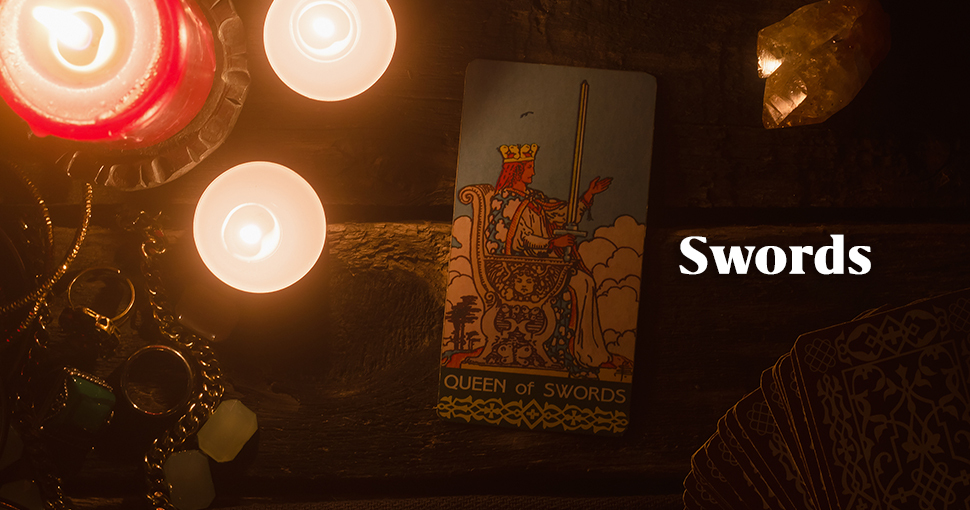 In an upright position, Swords represent;

In a reversed position, Swords represent;

What do Swords represent in Tarot? The suit of Swords is associated with mental activity, thoughts, attitudes and beliefs. Even in a literal sense, swords are double-edged and thus the suit symbolizes the tricky balance between wisdom and authority, grappling with the idea that these two factors can, in some instances, be used for wrongdoing. Moreover, people represented by Swords are intelligent, logical and have incredibly sharp communication skills. They are inherently rational and experience the World through analysis and a detailed eye.

The negative aspects of the suit of Swords include anger, abuse, a lack of compassion and generally challenging times. At their worst, people represented by Swords can be ruthless, tyrannical, confrontational and sometimes cruel.

In terms of timing, the Swords suit traditionally represents the Winter season. If a client is asking ‘when’ a situation is likely to occur, a Swords card can indicate this event may occur a relatively long way into the future - in a matter of months perhaps.

Swords in the Zodiac

Swords correspond to the element of Air and as such, relate to the Air signs of Gemini, Libra and Aquarius. Air signs are known for their communicative abilities, thirst for knowledge, community building and their ability to create a connection in a team. Thus, just like in Tarot, these qualities are much the same for the suit of Swords. Both Swords and Air are reflective, contemplative and big-thinkers; they quietly perceive social situations and as a result, respond in the most effective way possible.

The Significance of Numbers in the Minor Arcana 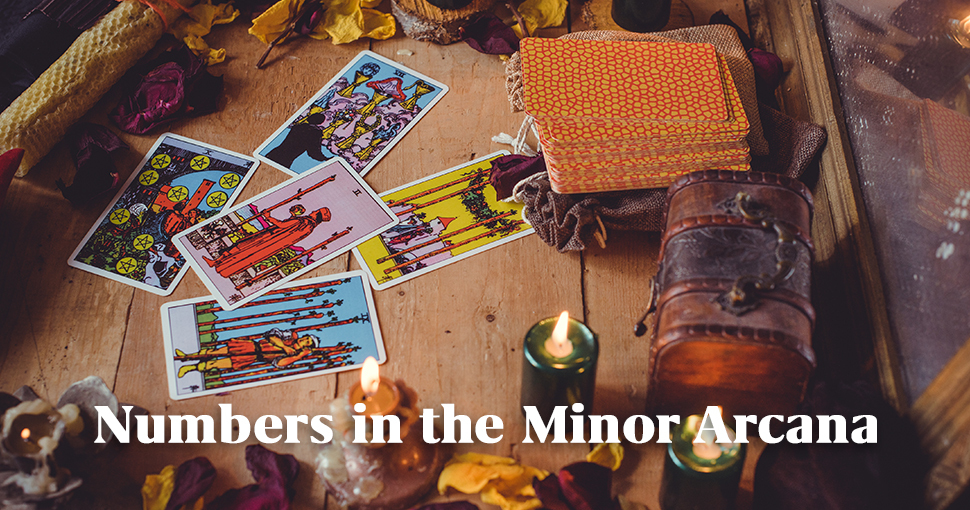 The numbers in the Minor Arcana add meaning and depth in a reading. Each number, regardless of its suit, corresponds to a general message that can be applied and adapted to the nuances within each suit. For instance, sevens are the number of introspection and intuition across the board in Tarot - however, in the context of Cups, this may be introspection regarding a relationship rather than career or finances.

The numbers in the Minor Arcana also relate to the Zodiac;

The Significance of Court Cards in the Minor Arcana 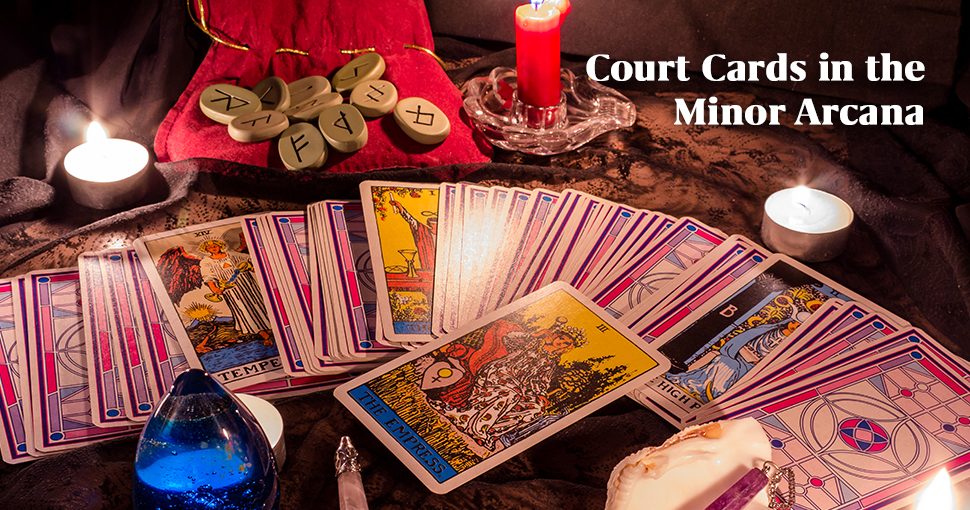 Court cards have an integral role within the Minor Arcana and are represented by Kings, Queens, Knights and Pages. However, in some decks, the Knights and Pages are Princes and Princesses respectively. Court cards generally represent people in the questioner’s life, including the questioner themselves, but confusingly they can very occasionally represent situations. Trying to decipher when court cards are representing a scenario versus a person is quite hard to do. A second layer to acknowledge is that each royal rank is also assigned an element; Kings correspond to Fire, Queens to Water, Knights to Air and Pages to Earth. By now, you should be able to appreciate just how closely entwined Tarot and the Four Elements are. As such, understanding one helps provide greater clarity for the other.