Home / Articles and Media / What are Totem Animals?

What are Totem Animals?

What are Totem Animals?

The origins of totems can be traced back to the Native American tribes that resided in the North-West coast of the United States. In this context, totems were (and still are) tall, intricately carved wooden structures depicting, on occasion, natural objects, but mostly animals that the tribespeople believed to have some form of spiritual significance. The animals chosen are typically the ones that inhabit the tribes’ surrounding area, and the totems were then placed in a clearing or anywhere highly visible for tribespeople to worship and pay their respects. While the belief systems behind totems vary somewhat between the various tribes, many tribes hold the opinion that their totem animal is their tribal ancestor and protects its members. Each totem animal is also believed to impart different qualities and skills onto its members, with each tribe bearing varying forms of duty in accordance with their totem. So, naturally, totem animals are incredibly important in Native American culture, but this is not to say that people from all over the world cannot connect with their own totem animals themselves. In fact, all of us have totem animals that impart their knowledge, power and energy onto us, and each gives us a set of personal responsibilities to face in life. For instance, those who have a wolf as their totem animal may struggle with being defensive and guarded. As such, the wolf totem serves as a challenge for this individual to tackle these traits and morph them into more positive characteristics. Put simply, whatever the animal may be, their main purpose is to teach us lessons and generally guide us into being better versions of ourselves.

Totem vs Power vs Spirit 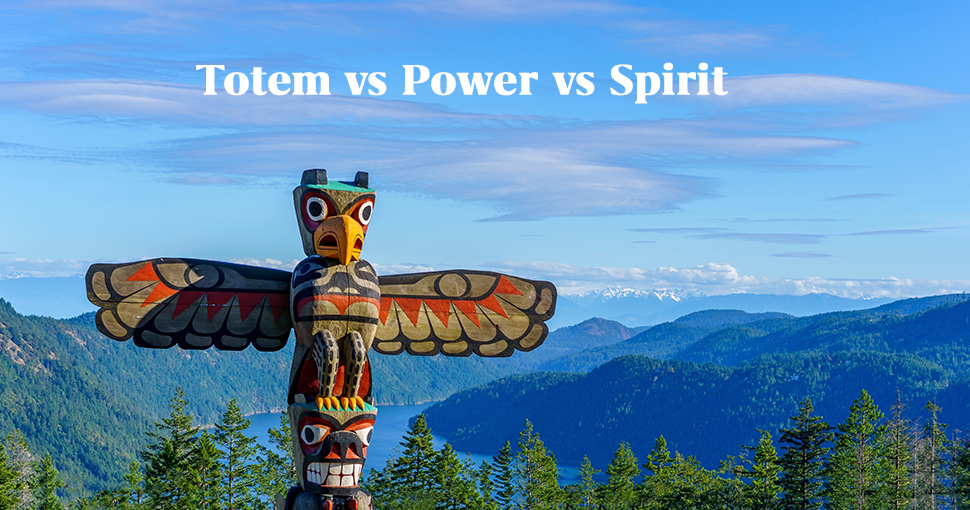 So, while the meaning of a totem animal may be clearer now, it can still be difficult to distinguish from the two other types of spiritual animal protector; namely, spirit and power animals.

Spirit animals are similar to totem animals in that they provide us with protection and guidance, however, the key difference is in how these two animals present. For spirit animals, they present themselves when they are called upon by an individual, both consciously when we call out to them and unconsciously when our soul is in need. Also, spirit animals offer us comfort and reassurance during difficult times, essentially giving us the thumbs up when feeling uncertain about which path to take. They tend to appear during particularly tumultuous times too, as a sign that everything is going to be okay and to remind the individual that good times are within reach.

Power animals are less well known in the realm of spiritual animal guides, but are an important player nonetheless. They appear when we call on them, but only when we need help in a very specific situation. These situations tend to be of a nature that requires an extreme amount of power and energy - such as a really challenging interview or competing in a competition. As such, power animals give us the drive to succeed in that moment, and stay with us until the situation has passed. They give us the strength to reawaken an aspect of ourselves that has been lying dormant in order to achieve our goals.

As touched on before, totem animals are associated with a certain duty and reveal the challenges and responsibilities that an individual needs to face. Similar to power animals, the totem animal provides the strength needed to combat these obstacles, and similar to spirit animals, they are a beacon of comfort during these hard times. However, their key difference lies in the idea that we grow as people as a result of their influence. Totem animals stay with us our entire lives and guide us towards becoming the people that we are meant to be. Think of totem animals as close friends bearing hard truths. It can be uncomfortable to face these truths head-on, but our totem animals accompany us the whole way.

What is My Animal Totem? 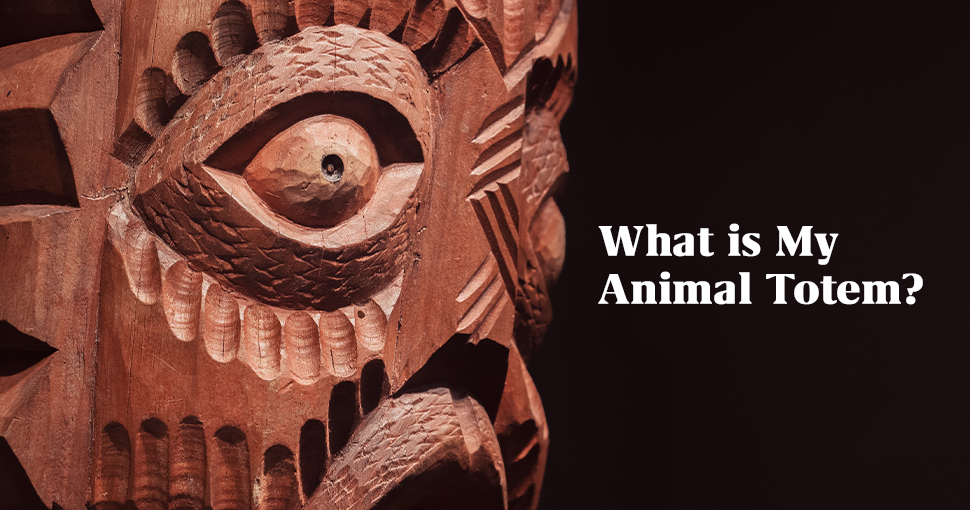 It can be difficult to identify what our totem animal is as they don’t magically appear in front of our eyes. It may take some digging and some soul searching to understand which animal is our personal totem, but following the tips outlined below is a great place to start.

One way to identify your totem animal is by thinking about the experiences you have had with animals throughout your life this far. It can be helpful to ask yourself which animals you were drawn to as a child, or which animals visited you most frequently or unexpectedly.

Another way to connect with your totem animal is through meditation. By meditating, we can dig deeper into our subconscious and unpack where our fears, desires and personal traits stem from. Also, by making mediation a regular part of our routine, we strengthen the bond we have between our mind, body and spirit. It’s through strengthening these connections within ourselves that we allow our spirit guides to make contact. As such, we are more likely to connect with our totem animal and understand the responsibilities they have given us in life. Simply asking ‘who is my totem animal’ or ‘totem animal, show yourself’, are ways in which you can encourage their engagement. Allowing an open heart and letting your guard down are also essential during this meditative process.

Our dreams are a window to our soul, revealing so much about ourselves that we may struggle to pinpoint in waking life. They reveal the thoughts and emotions that we keep buried amid the hustle and bustle of the day-to-day and depict the anxieties we may not even be aware of. As such, contacting your totem animal through a dream-state can be really impactful. Before sleep, speaking to the universe and calling on it to reveal your totem animal may just do the trick. Otherwise, look out for animals that appear in your dreams and think about the way it makes you feel. The power and energy behind a totem animal should make it easy to distinguish them amongst other animals you may encounter in your dreams also.

Lastly, getting out and connecting with Mother Nature is another fantastic way to help reveal your totem animal. If your intentions are clear and you have let your guard down to the universe, the earth will provide signs that can’t be missed. Look out for the creatures that reveal themselves to you in your natural surroundings.

Now that you have managed to make contact with your totem animal, learn about the qualities and traits of common totem animals below. 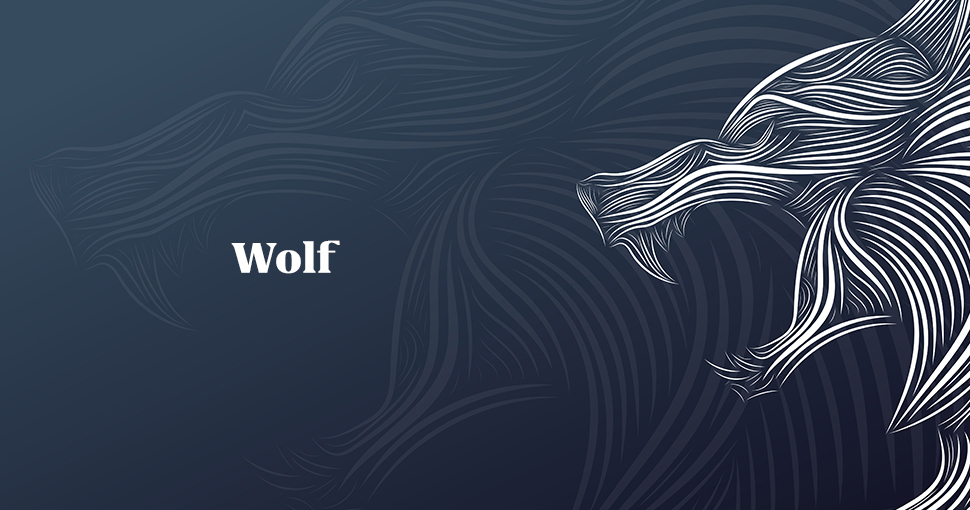 A wolf totem animal can signify that a person is naturally prone to feeling defensive and threatened. They may struggle to let their guard down or let people in, which can impact the quality of their personal relationships. As such, a wolf spirit totem animal provides this individual with the energy to let themselves become vulnerable. While this may not sound like much of a challenge, to those with wolf totems, vulnerability can be the scariest trait of them all. 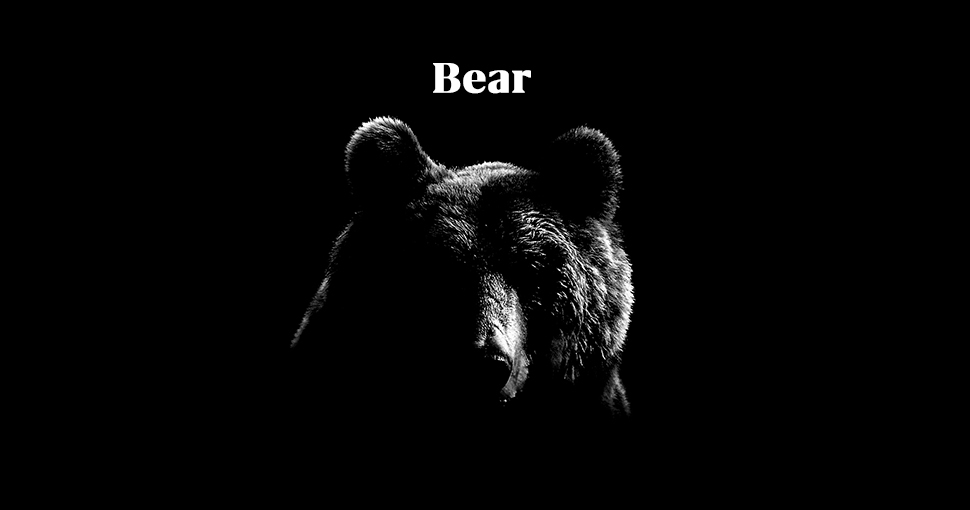 The meaning of bear totem is almost the inverse to that of the wolf. People with bear totem animals are likely to show great strength and fortitude, but are usually masking weaknesses that lie beneath. The bear totem, therefore, provides the spiritual power for this person to match their inner demons with the image they portray to the rest of the world. They are encouraged to be brave and fight their obstacles with the power of a bear, although they must remember to pick their battles wisely. 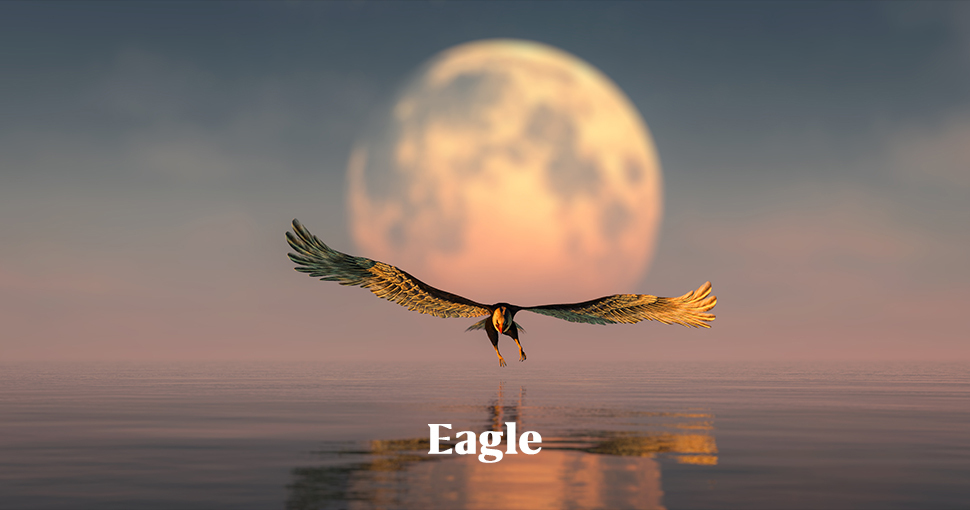 The eagle totem meaning is one of fire and passion. Eagle totem animals make themselves known when individuals have vast set goals for themselves, but aren’t quite sure how to achieve them. The eagle imparts its fearlessness and courage onto the individual and lets them know they have their back during the process. 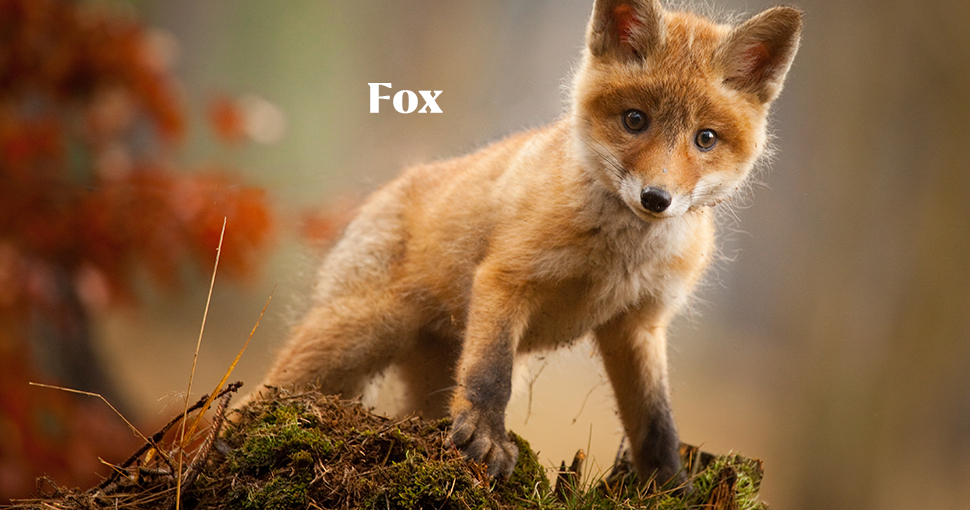 What is the meaning of fox totems? Well, those who have fox totem animals tend to be crafty and resourceful people. Just like a fox needs to be street smart and have his wits about him, these individuals know exactly how to get what they want and avoid detection. That said, a fox may get carried away in his attempts to scavenge and loot, so the fox totem animal warns against falling into this trap. We are reminded by him to maintain a sense of integrity, and to never leave others disadvantaged in our wake. After all, the fox totem has learned all of these lessons himself, and knows it is now time to impart his wisdom on those he is guiding. 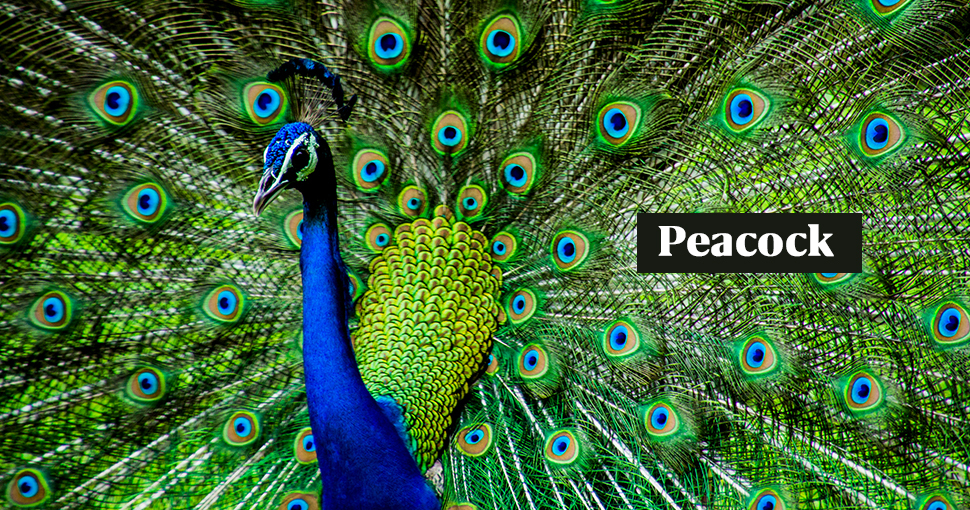 Peacocks are some of the most beautiful and extravagant animals to walk this planet. As such, a peacock animal totem encourages individuals to look for the beauty in life, even when everything feels gray and miserable. Although the peacock himself is adorned in the most magnificent feathers, a peacock totem understands that life’s beauty often lies in the mundane; a quick catch up with an old friend, or the charm of a simple sunset, for instance. Whatever it may be, a peacock totem calls on people to look up and appreciate it. 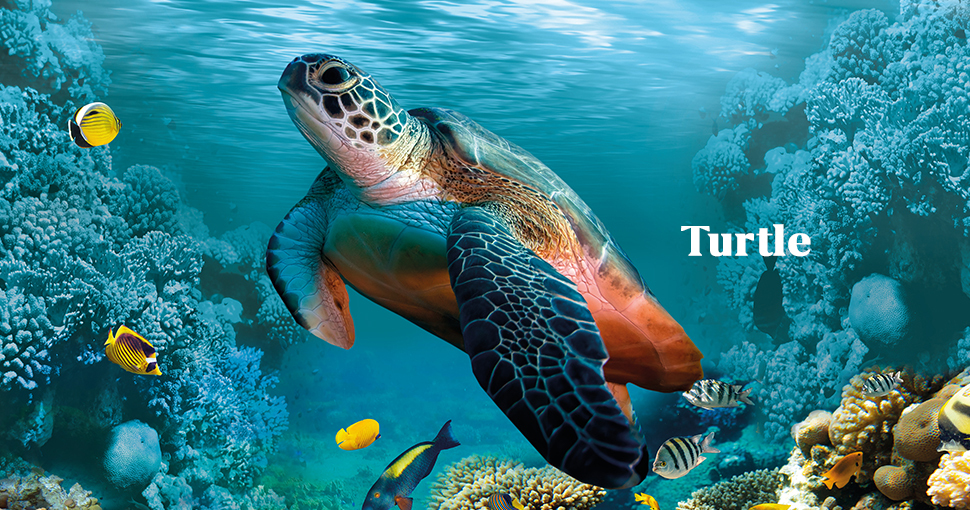 The turtle totem meaning provides guidance to those who rush into the next step before slowing down to consider their options. By being in a panic to succeed or deliver, these people can trip up on avoidable pitfalls. This is where the turtle animal totem comes in, to encourage them that slow and steady wins the race. When we are more thoughtful with our actions, we take a more meaningful approach to life and reap the most positive results. Rarely is there a benefit to bulldozing into a situation, and the turtle as a totem reminds us of this. 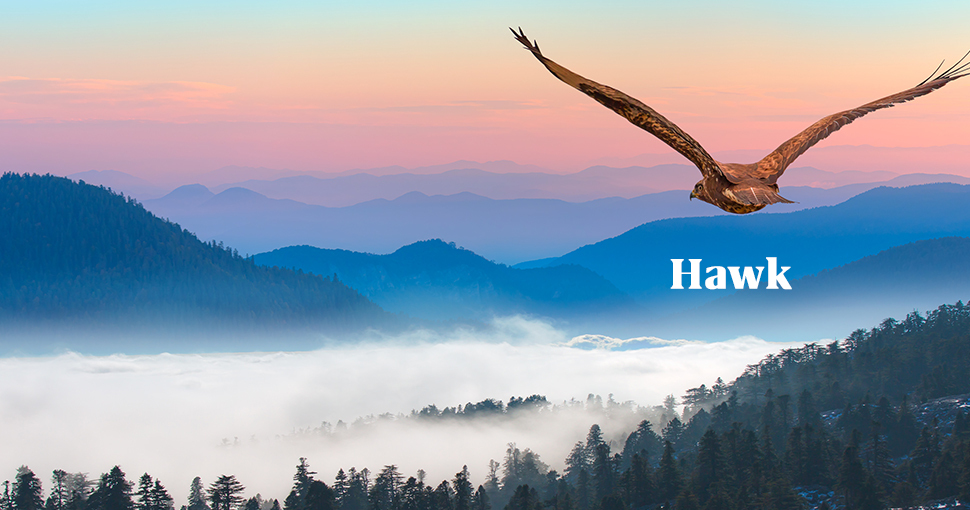 The Hawk totem meaning encourages those suffering from self-doubt and anxiety to push through and tackle their fears. As a bird of prey scans the ground beneath him for any sign of movement, a person can take this as an example of how they ought to approach their ambitions. Never take no for an answer, and take any opportunity as it comes - no matter how big or small. While this may not be smart advice for everyone, it certainly is useful for the people guided by the hawk totem animal. 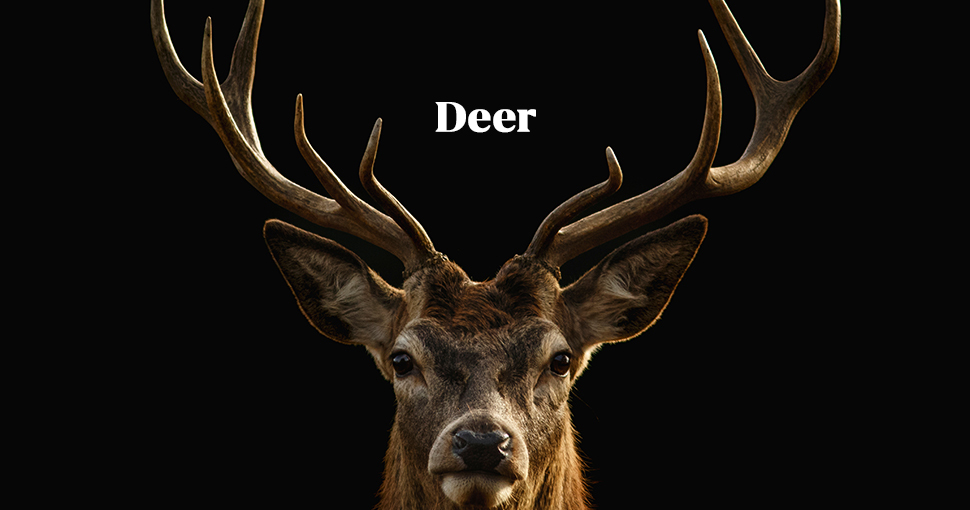 People lucky enough to be guided by the totem deer are spiritual by nature and incredibly kind-hearted. Due to their wonderful qualities, the kind of qualities that make them wonderful friends and partners, these people are at risk of being taken advantage of. Ill-intentioned people will see the softness of these individuals and do their best to take what they can. However, while the kindness of deer totem people can be part of their downfall, these creatures are quick to react. Like a deer in the woods, the slightest sound will send them fleeing to safety. This is the same energy possessed by the deer totem itself - the deer teaches the individual the need to be on-guard and astute. The deer totem meaning reminds us that kindness is everything, but learning to protect yourself is arguably the most important of all.