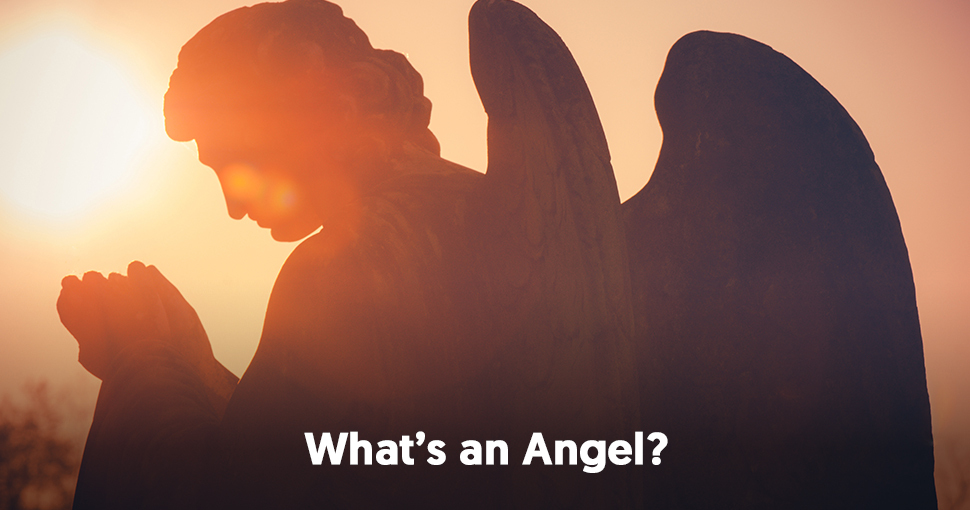 Written about in the scriptures of multiple faith traditions, angels are supernatural beings who live to serve their god, sometimes acting as messengers between their god and humans, and sometimes as guardian spirits to humans. Some angels have specific jobs, such as those in the Book of Revelations whose sole duty is to hold back the winds so it could not blow, ( Revelations 7:1) and others , like The angel Azrael , is called an angel of death. In Islam, it was said that he earned that title by being the only angel who succeeded in gathering dust Allah wanted to use to create the first man, Adam. In the Hebrew Scriptures, the “Angel of Death” is not specifically named, but destroyer angels are seen in such books as in Exodus where the destroying angel who brought death passed over the homes of devoted Israelites, striking only homes that were not marked safe by the blood of a sacrificed animal.

Different hierarchies of angels have been written about , ranging from the humble Ishim who are closest to the world of humanity, all the way up to the Hebrew god’s throne bearers called The Living Beings. They were written about in both Ezekiel and the Book of the Revelations as having many eyes, many wings, and who in the Book of Revelations bear and hold up the throne of their god, yet in the Hebrew Zohar, hold up the “firmament” or the general sky over the earth created of that god.

Archangels are another being entirely. These are high ranking angels with very important tasks. The Roman Catholics speak of three Archangels, and say the Archangel Michael led the angels who battled and overthrew the devil, protecting heaven. The Eastern Orthodox churches named seven Archangels but write that there are thousands of them. Islamic scriptures say there are four, and say Michael brings mercy, thunder and rain to Earth. The Jewish Kabbalah lists ten archangels whose jobs range from being a scribe of their god, to holding all secret magical knowledge, to taking prayers from humans to their god.

In different scriptures, they may appear in different forms, but many religious writers point out that angels sometimes appear as regular people, and people don’t initially know it’s even an angel! However, scriptures agree that at some point these angels usually let us know their true forms even if they physically manifest as ordinary people. Somebody had to know about it to write about it after all! If you have tried to communicate and have not received an answer, your best bet may be use of angel oracle or angel tarot cards.

What Are Oracle Angel Cards? 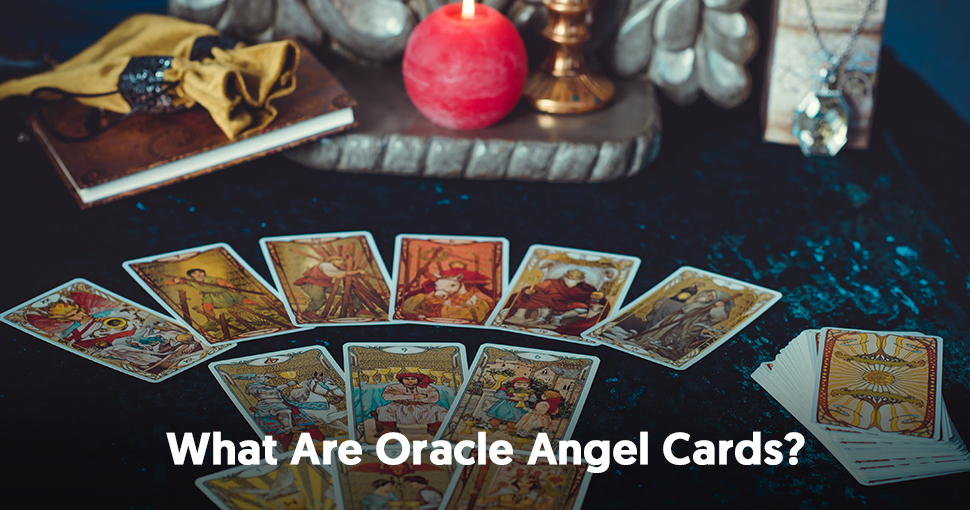 What is an angel card? Different angel cards are available, and some decks are just a regular tarot deck with images of angels on each card’s artwork. Some contain no Major or Minor Archana at all, and instead just contain different messages. When it comes to oracle cards, angel cards are designed to specifically act as a tool that identify what your angel is trying to tell you. There are countless different decks of cards that are for angels psychic readings, and some are themed as guardian angel oracles, others as animal angel spirit decks!

The wonderful thing about today’s readers is they let merchants and manufacturers know that no two angel readings psychics are exactly the same. That’s why there is such an amazing variety of things available for you and your psychic to use as tools. Take for an example a simple Amazon.com search for “Angel Oracle”. Dozens of card sets come up immediately! What are angel readings between you and your angel? You shuffle the deck, pull the cards after feeling your Angel is ready to speak to you, and then you read what the cards are saying to you. Yes, that’s all!

Another question that is asked a lot is what does an Angel card mean in Tarot Cards? Well, there is no angel perse in the Major Arcana of Tarot. However, the classic imagery on the Temperance card shows an angel pouring water or a rainbow from one golden chalice into the next. Mysticsense has explored the Major Arcana before, and in that article, we wrote,

“ The Temperance card is very straightforward. Right side up,

it means you have your mind, soul, and emotions well balanced

and you are in a good place with your coping mechanisms.

Reversed means quite the opposite. You are put on notice with a

reversed Temperance card to stop, collect yourself, and be rational.

You may be overindulging, or behaving recklessly,

and this card reversed is telling you to stop.” 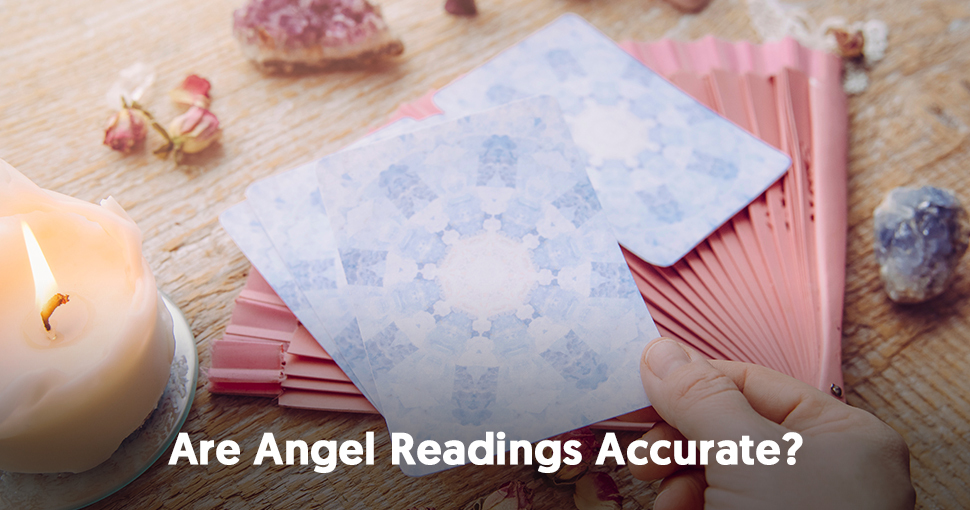 Angel readings, what are they if not accurate? Reading angel cards should be simple and that is because it’s the voice of your Angel making contact with you. You may not even need the cards at some point, but like to keep them on hand for their beauty and you’d like a quick quiet answer without too much meditating. The more you use your cards, the more power they hold for you.

How to Read Angel Cards 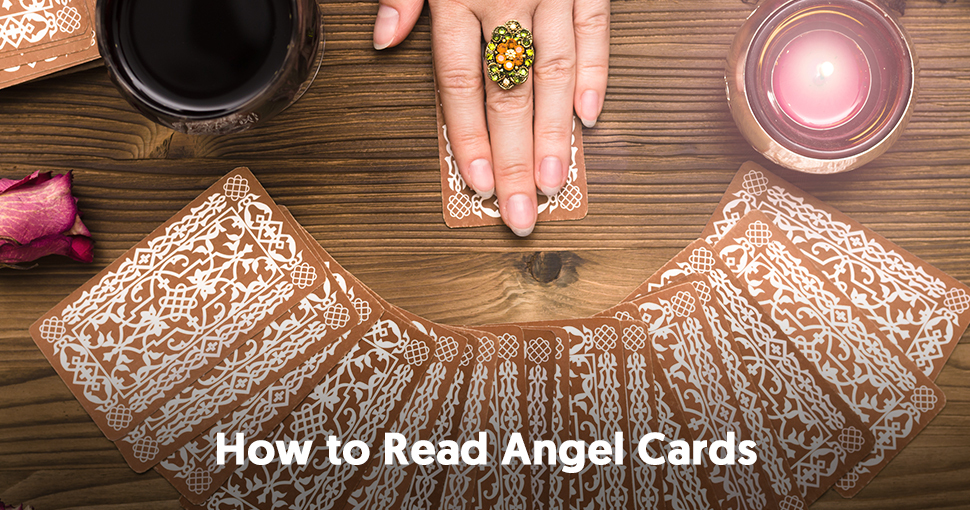 Before reading the cards, it is imperative that you establish clear communication with your angels. Other than basic meditating, and simply asking their god to send angels to speak with you before reading, scriptures tell us how other people have initiated clear communication with angels. Surprisingly, in these scriptures, often angels simply appear before people when they are in need of answers, as if simply thinking of needing help makes them come.

Well known author Christopher Penczak wrote in his publication The Witches Shield: Protection Magickand Psychic Self Defense that calling to the Archangel Michael to send a pillar of light to protect will get an immediate response, as some who have used this method swear by. Asking is said to get a yes from this angel and immediate protection. References to people speaking with angels can be found in scriptural books including books of Genesis, Numbers, Kings, Hebrews and Luke. Often, the angels initiate communication, but you can initiate communication yourself too.

If them initiating communication doesn’t happen, all you have to do is ask for them to speak to you. Yes, it’s really that simple! Ask them something like “ Please speak to me through my angel reading. I need your guidance and wisdom. “ This can be silent or aloud, whichever you prefer. Then pay attention. Sometimes a reading won’t be entirely necessary after calling to them, but a little voice inside your heart will let you know the angels are ready to speak to you. Sometimes, you feel a peaceful presence, or even see them in a dream, as Joseph did when being told to take Mary and Jesus away to safety! 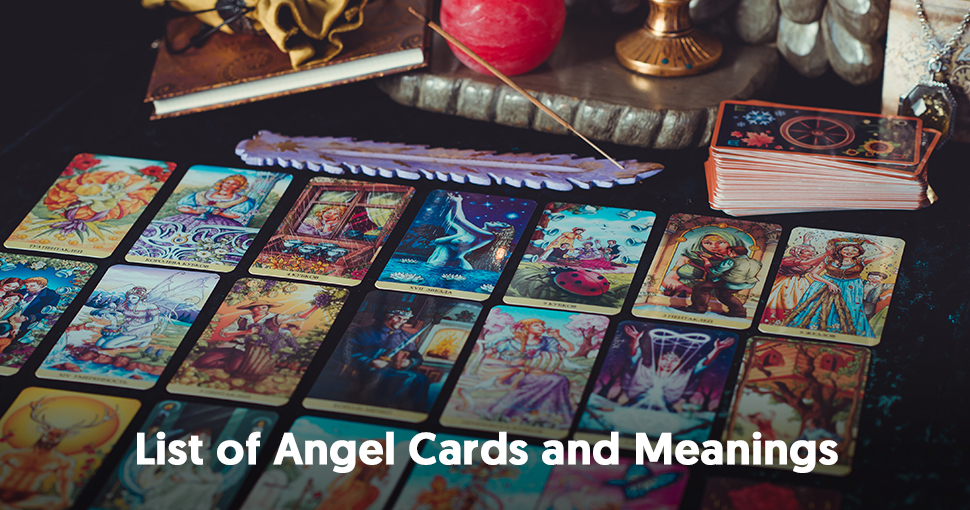 Because there are so many different angel oracle decks, there is no ONE conclusive list of meanings of these cards, but there are some specific kinds of angel cards that are well asked after. While we don’t recommend any deck above any others, here are some that are readily available to you and can be bought online and shipped to your home. 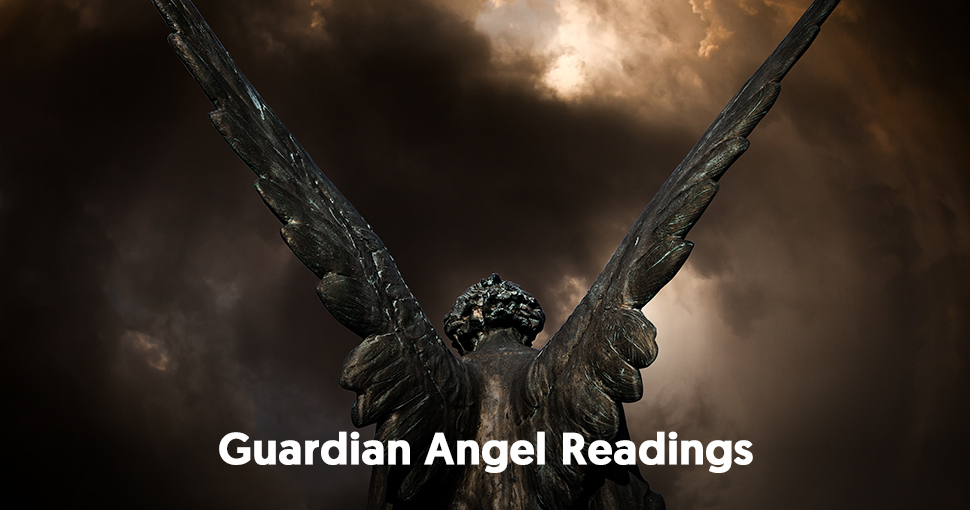 It is believed by many that we all have a guardian angel who watches over us all the days of our lives. Some readings and card sets designed to hear from that angel in particular include the Guardian Angel Oracle Deck by Delia Ciccarelli. This deck contains 72 cards and a 160 page book explaining each of them.The Guardian Angel Oracle Deck - Book Summary & Video | Official Publisher Page | Simon & Schuster (simonandschuster.com) 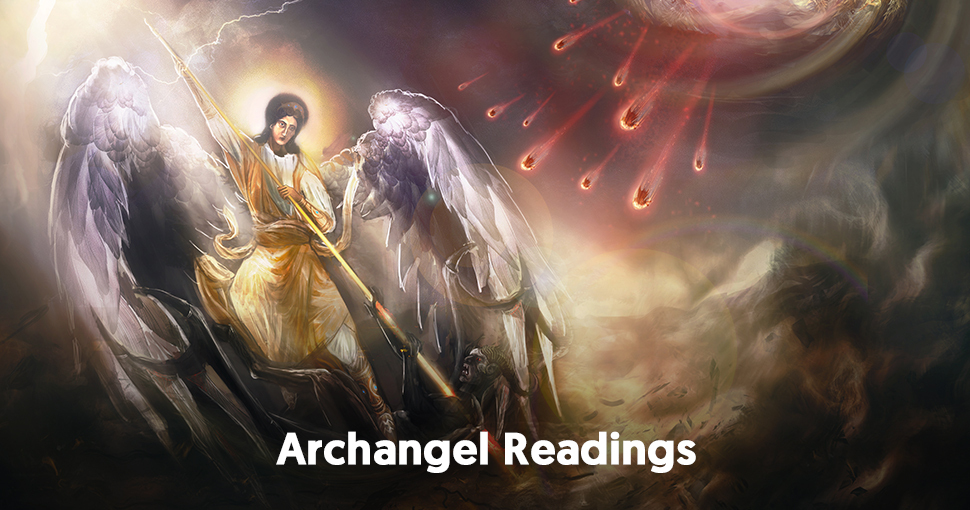 The powerful archangels are sometimes asked after by devotees, and there are decks that are designed with that in mind. Doreen Virtue angel card readings can be had from a deck she designed called the Archangel Oracle Cards. 45 cards in this set share the wisdom of 15 different archangels and are sure to help guide you.Archangel Oracle Cards: Virtue, Doreen: 9781401902483: Amazon.com: Books 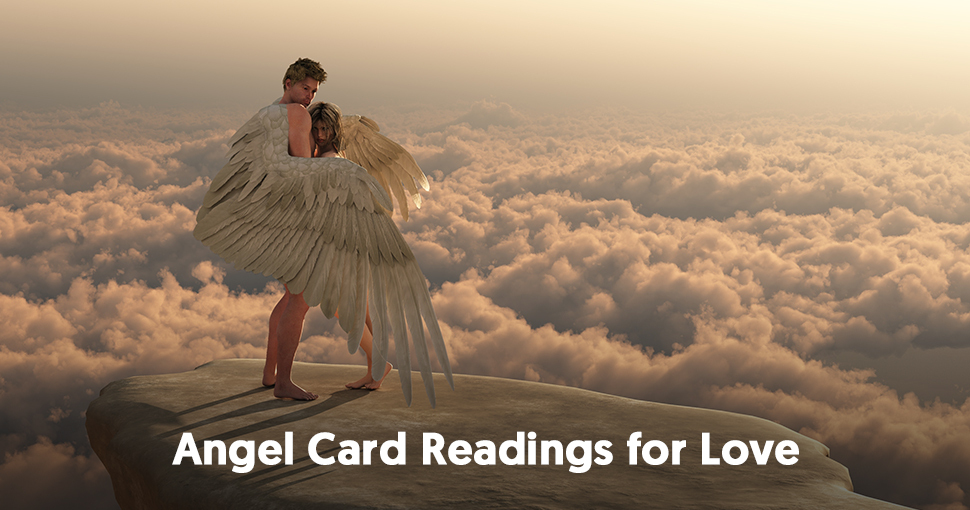 Who understands love more than eternal beings dedicated to serving the creator? While there are different kinds of love, many do ask the angels about romance, and there is at least one very convenient deck you can do an instant download of. It will answer questions and save on cash. It’s called The Love Angels Oracle Cards. Simply print all twelve pages with the 54 cards out, ask your angels about your love, and see them tell you the truth. This exciting deck is only a year old, released in 2020 by TheDivineOracleCards. 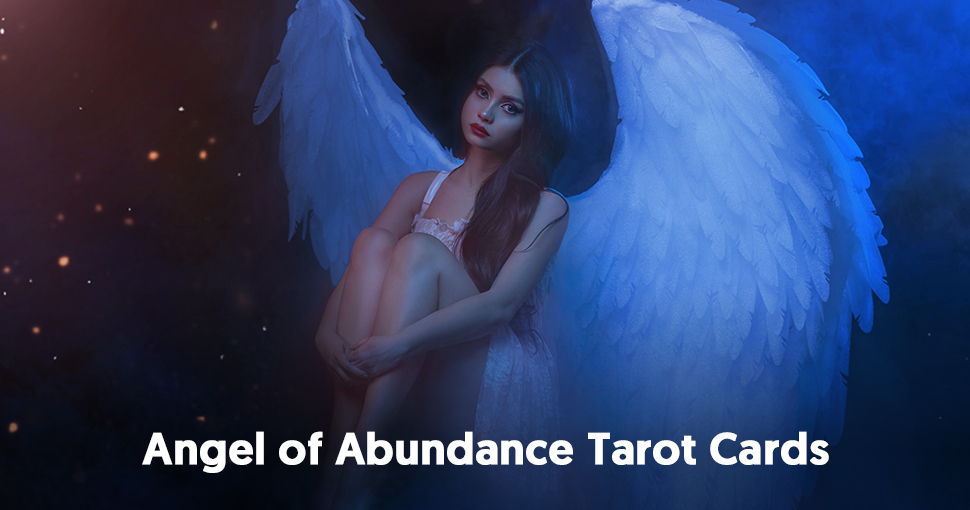 Created by Doreen and Grant Virtue, the Angels of Abundance Oracle Card set is another you will love. This 44 card deck and guidebook will help you identify what it is you need to do to bring more abundance into your life and how to manifest “support for your earthly needs, life purpose, and charitable giving . . . so you can enjoy the blessings that are your Divine birthright!” according to the Amazon listing. Costing a bit more than the instant download deck listed above, this deck is sure to help you with bringing more abundance into your life. 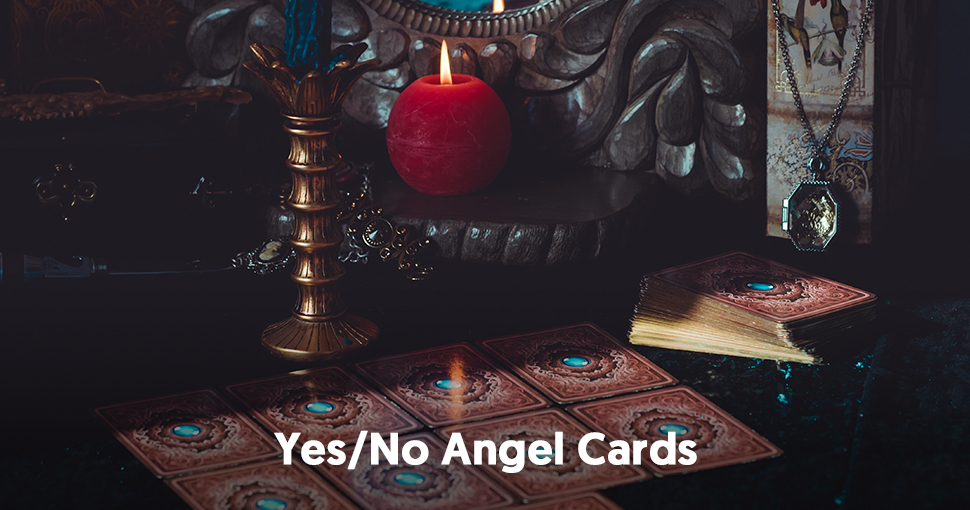 This can be done with any deck at all, and you don’t even need to specifically use an angel oracle deck for this. It’s more a technique and anybody can do this at home. Simply shuffle your cards, and ask your angel a yes or no question. If the card is right side up, the answer is yes! If the card is reversed, your angel is telling you no. 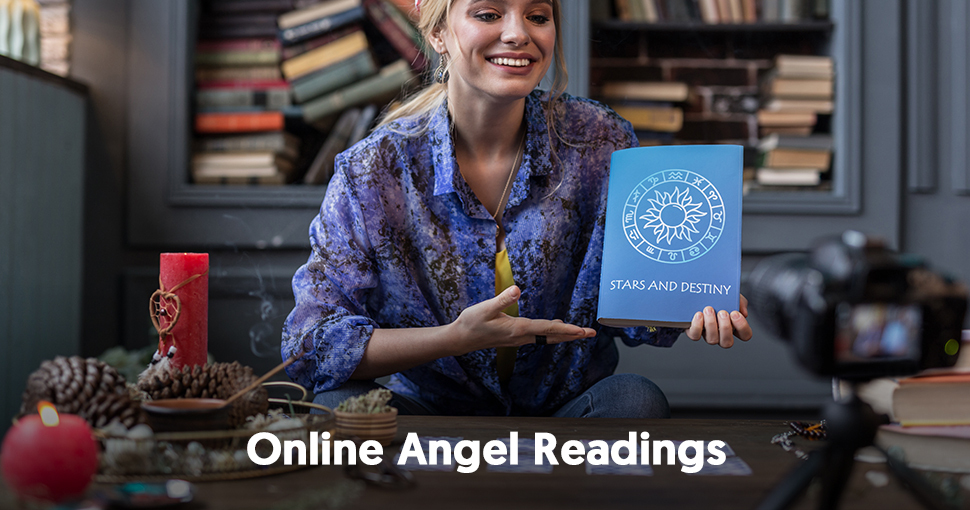 Not everybody does all their own readings and while communication with your angel is something very personal that you can do for yourself, there are plenty of gifted psychics who can act as mediums and do a reading for you.

What Are the Best Free Angel Card Readings Online? 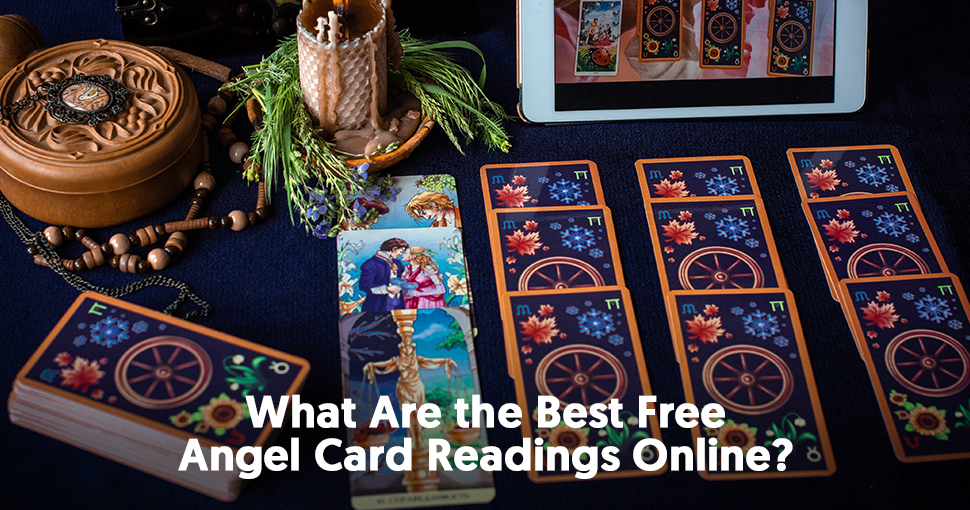 While nothing in life is completely cost free, there are ways to get lower cost angel readings. The closest way to get angel readings free is to learn how to do an angel card reading, buy your own deck, and read for yourself. If we could all do that for ourselves, no angel card reader would ever offer their services to us! Free online angel card readings have been offered at various webpages but those have a ton of popups containing ads that are difficult to maneuver around to get said reading, and even then, the free angel messenger card readings they offer are generated by a computer. Those are at best a basic free angel card reading, have no explanation, no angelic guidance, and while yes, they are a free reading with angel cards, you won’t necessarily get anything out of it.

While we don’t offer completely free angel readings, we do offer your first five minutes of your angel oracle readings free when you register with us! Let the talented online angel card reading experts at Mysticsense give you your angelic tarot card readings today! 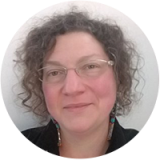